In an apparent disturbing escalation in violence, after the 61st consecutive day of protests in Portland, Antifa have been accused of throwing real explosives, not fireworks, at federal agents. 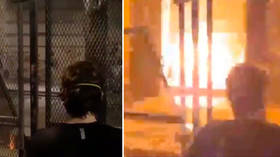 Approximately 1,000 protesters took to the streets of Portland on Monday evening, including parents and veterans groups, all of whom were teargassed in something that has become a nightly tradition.

Daily footage from the city shows that neither side is backing down and, in the latest disturbing escalation, accusations that members of the protest group have begun throwing actual explosive devices at authorities have been made online, complete with eyewitness video purporting to show the explosives in action.

The Antifa terrorists are now throwing explosives at federal officers in Portland. These are not fireworks. pic.twitter.com/UVZNzzPdmH

Until now, demonstrators have peppered the assorted federal agents with Roman candles and display rockets, but tensions and ensuing violence have increased night on night as video from the besieged city shows.

The arrest of one female protester on Monday night drew further criticism of the federal agents, leaving them facing accusations of using heavy-handed tactics.

The Justice Department also shared photos of materials seized from protesters throughout the unrest, which included several bottles of bleach, which can be used in the manufacture of explosives.

The protesters in Portland initially rallied against police brutality and racism after Minneapolis police killed George Floyd, but recently the protests have evolved into a tit-for-tat escalation in violence between the protesters, assorted agitators in their midst, and the federal agents ostensibly deployed to restore order in a controversial move by US President Donald Trump.