Iran’s top diplomat pulled no punches while slamming the US for scrambling fighter jets to challenge an Iranian airliner flying over Syria. The audacious move served to “compound lawlessness,” he said. 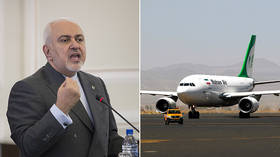 Mohammad Javad Zarif had some bold words for Washington, which said earlier in the day that the F-15 jet was sent in to carry out “a visual inspection” of the Mahan Air Airbus A310. It also said the flyby was to ensure the Iranian jet posed no danger to the American military base At Tanf, set up in the southeastern part of Syria without Damascus’ consent.

There were conflicting reports as to how many US jets took part in the encounter. While the US Central Command says one F-15 had approached the Mahan Air plane, some Iranian media insist that two warplanes were maneuvering in close proximity to the passenger airliner.

“The US illegally occupies territory of another State and then harasses a scheduled civil airliner – endangering innocent civilian passengers – ostensibly to protect its occupation forces,” Zarif commented on Twitter, before striking a harsher tone.

Audacity to compound lawlessness upon lawlessness. These outlaws must be stopped before disaster.

Other Iranian officials have also used similar language when giving their takes on the incident that saw the packed A310 rapidly changing altitude.

Minister of Roads and Urban Development Mohammad Eslami bluntly accused the US of committing a “terrorist act” by “attacking a passenger plane.” Tehran’s civil aviation authority reached out to the UN-run International Civil Aviation Organization (ICAO) to investigate the aerial encounter.

Several passengers received minor injuries in the incident, which was filmed from inside the plane. By Thursday evening the aircraft had returned safely to Tehran.