The rebranding of PM Boris Johnson’s RAF Voyager aircraft from gray to the colors of the British Union Jack – red, white and blue – is to cost a whopping £900k, prompting many Britons to label the move a waste of money. 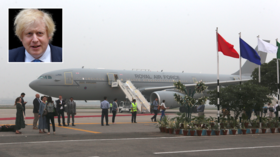 Downing Street confirmed on Wednesday that the costly paint job will be carried out so the PM’s aircraft can promote the UK around the world with iconic national branding, “similar to many other leaders’ planes,” and “without compromising the plane’s vital military role.”

Johnson’s spokesman insisted that the government has worked to “ensure value for money for the UK taxpayer.” The comment has been roundly ridiculed on social media.

Many people have blasted the timing of the announcement, in particular. It comes a day after Johnson’s administration was essentially dragged into making a U-turn on providing free school meals for vulnerable children during the summer holidays, following a high-profile campaign led by Manchester United footballer Marcus Rashford.

One commenter suggested that the plane-cost revelation might have gone down better “in a week they hadn’t spent fighting against feeding hungry vulnerable kids.” Another person hit out at the PM for prioritizing an “ego project,” rather than the devastation Covid-19 has wreaked on UK citizens.

Others online joked that it looked as if the UK government had “found that money tree again,” while another critic of the seemingly ostentatious plan called it “totally obscene.”

News of the plane’s rebranding also comes a day after Johnson scrapped the UK’s overseas aid department, claiming it had been used as a “giant cashpoint in the sky.” This prompted one commenter on Twitter to suggest that perhaps he’d found another use for the international development fund.

The PM’s spokesman confirmed that RAF Voyager is already undergoing the paint job in Cambridgeshire, England, and that the British royal family will also be continuing to use it for official visits.