WITH THE DUST having barely settled on the Six Nations, this has been another engrossing week in Irish rugby as, with European knockout games looming, Munster tried to make peace with their defeat to Leinster in the Pro14 final and, by the sounds of it, Leinster tore their own victory to pieces in the aftermath of their four-in-a-row league success.

There has been confirmation of significant impending departures from the provincial scene, too, with Connacht coaches Nigel Carolan and Jimmy Duffy stating their respective intentions to seek pastures anew from the end of the season and Munster duo JJ Hanrahan and Darren Sweetnam preparing to bring their mercurial talents to France.

All of this was discussed in detail on this week’s Rugby Weekly, wherein Bernard Jackman and Murray Kinsella joined Gavan Casey to remind listeners how good Leinster actually are, but also try to figure out why Munster aren’t better than the flat performances they routinely produce when it matters against their arch rivals.

Another hot-button topic, though, was a player signed during the week by the southern province in an attempt to bridge that gap in future, certainly, but equally to replace the soon-retiring CJ Stander, his South African compatriot whose service to Irish rugby is about to reach its end.

The42 Rugby Weekly · Let’s not forget how good Leinster are, but what are Munster actually doing?

Lock-back-row hybrid Jason Jenkins, who earned a Springbok cap in 2018, will arrive ahead of next season from Toyota Verblitz in Japan. Confirmation of his signing sparked much debate during the week — not about his ability, which is undeniable, but more so what it says about Munster’s talent-development strategy and bigger-picture thinking, or indeed lack thereof.

Murray and Bernard came at it from different directions but arrived at the same conclusion: that this was a short-sighted move by Johann van Graan and even his superiors.

“Purely on Jason Jenkins himself”, Murray began, “I think it’s a good signing but I think it’s the wrong signing in the wrong position and I actually just think it’s wrong, as well, that he’s coming in.

“He’s going to add to their squad, 100%. This guy is a huge specimen, six-foot-seven, 125kg; he’s springy in the lineout, he can carry close to the ruck — he’ll take over some of Stander’s dirty work in that regard and they absolutely had to replace that, I think. I can see it from their point of view.

“I know they say they’re going to play him blindside flanker but I can see him and [RG] Snyman starting at second row with Tadhg Beirne at six and Peter O’Mahony at seven and [Gavin] Coombes at eight. And to be honest, that’s an extremely good back five of your scrum.

“But I thought a hooker should have been their priority. A really top-end hooker would add so much to that pack, or a tighthead as he said.

And then I just think it sends out the wrong message. I really do. In terms of the young guys we’ve mentioned, in terms of — and this is purely optics — him being another South African player. So much of the reaction has been based on that fact and I know that might seem xenophobic, maybe, to some people, and ‘why not a South African player?’ But it just adds to the sense that Johann van Graan is just turning to South Africa every time he needs to find a solution to what’s going on in Munster. That disenfranchises some people and 100%, I get that. Munster has always prided itself on its community identity and I 100% understand why some fans have been turned off from that and they feel as though they’re losing that.

“I think it’ll cost the likes of Thomas Ahern and Fineen Wycherley game time”, Murray continued, “and I know Munster are probably saying here that they don’t think those guys are ready to go and start Champions Cup games — which is really hard for those players, I’d imagine.

I know Thomas Ahern is learning how to be a professional, he’s had to sit out loads of training sessions here and there as he gets to grips with that side of it. But I just think: make that work. He’s your generational talent, get him in there as soon as possible and make it work. Put some onus on yourself to fast-track a guy of that potential.

“So, I’m a bit mixed on it. I think it makes them a better squad, a better team, but I think it’s wrong.”

Aside from the fact that he nearly blew me out of it when I suggested Munster’s marginally younger players *might* actually learn from Jason Jenkins, @Murray_Kinsella was brilliant here. (And @bernardjackman, too, afterwards👂 : https://t.co/o5yxBCHCfO) pic.twitter.com/VUhvaYfCqw

“I guess the feeling from Munster is that — and they’re on the record as saying — those younger guys ‘will learn from Jenkins’,” Gavan added. “And of course, they will — he’s a fabulous player. But he’s also 25, you know?”

“They won’t learn from him,” interjected both Bernard and Murray.

Jason Jenkins is not going to teach Thomas Ahern; he’s maybe three and a half years older than him. There’s so much bullshit said in the media and that’s part of it.

“The one thing that mattered from what Stephen Larkham said [post-Leinster defeat] is, ‘We want to win trophies; you guys understand that, people hold us to that standard.’

And that’s what this is about: next year. It makes them a better team, it’s very short-term, and that’s an issue. Like, why can that money not be spent on a longer-term thing, like Munster fixing the Limerick club system? There’s so much talent there, so many good people working at those clubs. It needs to be joined up more. They can get, I think, really good players out of there far more often than is the case now: there’s one Limerick guy in the academy, which is absolutely bonkers. And however many hundred K they’re paying Jason Jenkins, you could make a massive dent in sorting that out — for years to come, not just next year.

“That’s the frustration from my point of view.” 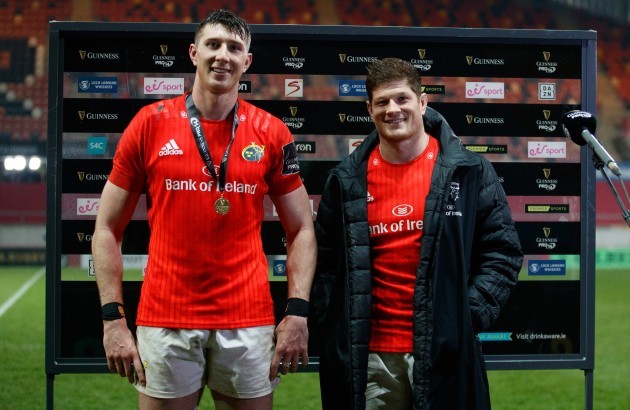 Thomas Ahern with his player-of-the-match medal following Munster’s win over Benetton a fortnight ago.

Bernard added: “I actually don’t blame Johann, really, because when I was at Grenoble, I wanted to sign lots of players, I’d go to the president and he’d tell me: ‘No money.’ I’d have to go back down to my office and make another plan. Or at the Dragons, there was obviously financial limitations plus Welsh-qualified was the priority.

“So, I understand what a coach will want to do but I also think it’s important that someone above you says, ‘Look, this doesn’t make sense for us,’ and, ‘Obviously, there’s an expectation to win trophies but we will give you everything we can within certain criteria and restrictions to do that.’

I’m not sure whether it’s the Munster CEO or whether it’s David Nucifora but I think this is one of the ones that they should have blocked. Obviously, he’s a good player and, obviously, he could potentially play with RG in the second row. But there’s Sam Carter up in Ulster, there’s RG Snyman — two foreign second rows already in the country who can’t play for Ireland. I think you have to look at Munster and say, ‘Where do you really need [players]? Where’s the weakness? And I think it’s front row.

“In your depth chart you have Wycherley and Thomas Ahern who we like a lot, have potential.

Thomas Ahern could play for Ireland if he comes through to the level we think he can and this is going to block him. That’s outrageous.

“In this country we have this system where everything should be aligned and make sense and here’s an example where it doesn’t look like it makes sense from a player-development point of view: it’s blocking a couple of young Munster players who have potential.”

You can listen to the podcast in full wherever you get yours — on Apple Podcasts, Spotify, etc. And The42 members can also tune into our Rugby Weekly Extra analysis pods with Murray and Eoin Toolan every Monday (Tuesday next week due to the bank holiday).

Murray Kinsella, Bernard Jackman and Gavan Casey look back on the Pro14 final and ahead to the provinces’ European knockout games.