Huge crowds calling for the resignation of Israeli PM Benjamin Netanyahu rallied outside his home in Jerusalem on Saturday amid growing discontent over the government’s Covid-19 response, high unemployment, and corruption. 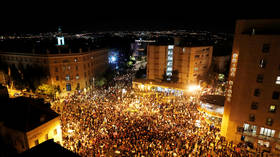 More than 5,000 people gathered on Balfour Street, now a site of frequent anti-government demonstrations, according to Haaretz newspaper, making it the biggest of several protests this week. Demonstrators also rallied elsewhere in Israel.

Half an hour ago, outside Netanyahu’s Jerusalem residence pic.twitter.com/SrUOWTj9Ak

The protesters’ grievances focus mainly on Netanyahu’s handling of the pandemic, including a strict lockdown that caused unemployment to surge and a spike in cases after the abrupt lifting of safety measures in May. Demonstrators also are decrying legislation passed this week that granted the government emergency powers until 2021, as well as Netanyahu’s refusal to step down as prime minister despite facing corruption charges.

The rally saw a heavy police presence with officers pulling people out of the crowd and then releasing them without charge, according to local media. More than 100 people were arrested during this week’s protests.

But police didn’t use water cannon to disperse crowds, as they did on Thursday. Rally organizers threatened in a letter to Jerusalem’s police chief on Saturday that they would petition Israel’s High Court if officers used such tactics again.

This was Thursday night. I find it hard to believe Israel Police have no training in peaceful crowd dispersal. But that is what we’ve seen so far. pic.twitter.com/UE89JPiP8b

Several demonstrators were pepper-sprayed during Saturday’s protest by an unknown attacker. Police arrested an unidentified suspect who was found in possession of pepper spray, a flare and “material suspected of being a dangerous drug.”

Netanyahu lashed out Saturday evening at Israel’s leading news broadcaster, Channel 12, saying its coverage of the demonstrations was fueling the protests against him.