CLAIRE O’RIORDAN ALLOWS her mind to wander for a second when she’s asked the question.

What would it mean for you to play for Ireland in a World Cup?

“I don’t even think I’d be able to put it into words,” the striker-turned-defender shakes her head, almost in disbelief that it could become a reality. “It’s such a magnificent event in sport.

“To be able to say number one you played there and been successful in reaching there is an amazing achievement in itself. But to be there and play would just be out of this world.

“A lot of work needs to be done in terms of being successful doing that. It’s the dream, it’s the goal hopefully someday and we’ll keep working towards it.”

Of course, this is just the start. The next chapter is only beginning as the bid to reach a first-ever major tournament opens all over again. Vera Pauw’s Girls In Green face Denmark and Belgium in international friendlies over the coming days as preparations for the 2023 World Cup qualifying campaign ramp up.

It’s a window of opportunity for fringe players to step up and stake their claim for a more regular starting place. O’Riordan, who plays her club football with Bundesliga strugglers MSV Duisburg, is one of those, yet to start under the watchful eye of Pauw.

It feels like a clean slate after the disappointment of how the curtain came down on their Euro 2021 qualification campaign, with the World Cup draw pencilled in for 30 April and qualifiers for the finals — hosted by New Zealand and Australia — beginning in September.

“It was a disappointing end to 2020 but this is a new year and we will be preparing for these two games having not been together in a while,” O’Riordan nods, the squad assembling this week for the first time since the last campaign ended.

“We’re always looking ahead, we have these friendlies and training camp, get some positive results and performances to bring into the next camp and then the qualification group. It’s a big year ahead, and it’s one that everyone’s really looking forward to working towards.”

None more so than O’Riordan, who made the move to Germany from Wexford Youths in 2018 and has made 15 senior appearances for her country.

On these shores, the Limerick native played predominantly as a striker, but has been transformed into a centre-half there. Well accustomed to her new defensive role, she’s moved further forward at times — like in a recent clash with fellow relegation battlers SC Sand, where she popped up with a 90th-minute equaliser.

“I suppose I did need to be refreshed,” she laughs. “It was exciting. I went over to Germany and learned the new role as centre-back, it was adamant that I would be sticking there.

“But with the way this season has gone and the limited players we have within the team, the coach has tried to put some faith in me up top. I’ve enjoyed it to a certain extent, it has been really nice, I like the way I have been able to go up there and do something for the team.

“It was a pinnacle point in my career, to play a game on St Patrick’s Day and score a goal which was vital in the relegation battle. So I really enjoyed it. I don’t know what will happen after the international break in terms of where I’ll play. I’m happy to bring some versatility to my game as well.” 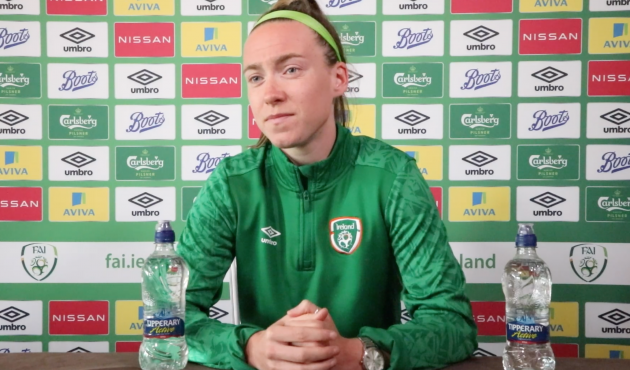 O’Riordan speaking to the media this week.

The 26-year-old believes Pauw “will get as many minutes into players as she can” in these, her first friendly fixtures at the helm, with giving “everyone an opportunity to show what they can do in an international fixture” and garnering experience key.

That said, it may be a baptism of fire of sorts, with Denmark — an impressive and dynamic outfit who finished runners-up at Euro 2017 and qualified for this summer’s championships — coming to town on Thursday [KO 6.30pm, RTÉ Player].

Chelsea superstar and two-time Uefa Women’s Player of the Year, Pernille Harder, is in their squad, a familiar opponent of O’Riordan from her time in the Bundesliga.

“She is going to be just another player on the team,” she says, when asked if coming up against Harder is daunting or exciting. “Obviously she is world-class and everyone knows what she was achieving with Wolfsburg, and now Chelsea.

“She is not the only player in the Denmark team we need to be aware of, we will be doing our homework on all of them. Denmark are preparing for a major tournament so this is a great opportunity and a test for us to see where we are and how we can improve.”