The Musee d’Orsay in Paris has been forced into making an apology for the alleged puritanism of its personnel who refused entry to a woman entering the art museum in a low-cut dress on a hot day. 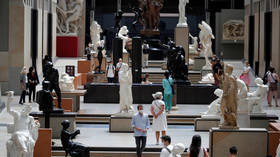 The French woman racked up scores of comments and likes after she complained about being refused entry to the Musee d’Orsay on Tuesday. A day later, she told her Twitter audience that the museum staff tried to keep her from entering because of her low-cut outfit.

Ticket agents and security guards repeatedly told the woman, who goes by @jeavnne on Twitter, that “rules are rules.” In an open letter to the Musee d’Orsay, the woman alleges that the museum staff were staring at her cleavage while refusing her entry. She said she was eventually allowed to enter when she put on a jacket.

The museum has reached out to the woman, offering personal apologies for the overzealous staff.

“We have learned of an incident that occurred with a visitor when she entered the Musee d’Orsay,” the institution publicly said on Twitter. “We deeply regret this and apologize to the affected person that we contact,” the statement read.

Ironically, the museum does house a number of nude paintings – including those featuring a close-up of female breasts, abdomen and genitals – by renowned French artists, among them Edouard Manet, Gustave Courbet, and Jean Auguste Dominique Ingres.

Still, it appears the staff may have had the rules on their side when stopping the scantily-clad visitor. The museum website guidelines state that “wearing an outfit susceptible to disturbing the peace” may lead to a person being banned from entering – although the very same rules set no specific dress code for visiting the venue or what exactly “disturbing the peace” entails.

Back in 2013, the museum allegedly kicked out a disadvantaged family visiting the world-famous site as guests of an anti-poverty group after visitors complained about their smell.