Disgruntled farmers have gathered in the Polish capital to denounce a bill that would ban breeding animals for fur. Protesters say it will endanger their livelihoods, while the government argues they had enough time to prepare. 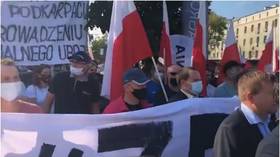 Hundreds of protesters rallied outside the main office of the ruling Law and Justice Party (PiS) in Warsaw. They carried Polish flags, chanting “Betrayal from PiS!” and slamming the party’s leader, political heavyweight Jaroslaw Kaczynski, as a “traitor to farmers.” After an argument with police, several people were allowed to enter the party HQ in order to present a petition for Kaczynski.

Kaczynski proposed a bill dubbed ‘The Five for Animals’, which would ban using animals in circuses, set guidelines for keeping animals on leashes and dogs in cages, limit the ritual slaughter of animals, and give more power to animal rights groups. The farmers, however, were outraged by the part of the bill that would ban the breeding of animals for fur, with the exception of rabbits.

The head of a large farmers’ union, Slawomir Izdebski, called the ban on fur breeding “a slap to the face” from PiS, which traditionally styles itself as pro-farmer. The opponents of the ban argue that it was proposed for purely ideological reasons, and are afraid that many farms would go bankrupt, as the fur sector employs around 50,000 people.

Defending the bill, PiS spokesperson Radoslaw Fogiel said that it would introduce a more humane treatment of animals, while the fur industry “has had plenty of time to prepare for the coming changes.”

“The social tolerance towards such types of activity is ending, and breeding animals for fur is already banned in several European countries,” Fogiel told the wPolityce.pl news website.