Children can’t fully understand the lifelong repercussions of taking hormone blockers at an early age and thus can’t consent to the treatment, the lawyer for two women suing the UK’s only NHS-run youth gender clinic has claimed. 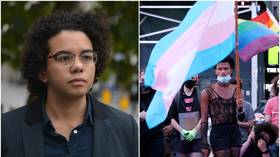 Transitioning youth who take hormone blockers have a “very high likelihood” of moving on to cross-sex hormones, which can cause “irreversible changes” such as “loss of fertility and sexual function, and decreased bone density,” Jeremy Hyam QC told the High Court on Wednesday, arguing that young people who begin the treatment are incapable of fully understanding the permanent damage they are doing to their bodies and thus cannot truly give “informed consent.”

Hyam represents two women who are suing the Gender Identity Development Service (GIDS), the UK’s only NHS gender clinic specifically for children, to ban the prescription of hormone blockers to youth without a court order affirming the treatment is in their “best interests.” The treatment “does not have any adequate base to support it,” and the effect of the blockers “on the intensity, duration, and outcome of adolescent development is largely unknown,” he said during the hearing.

The claimants are Keira Bell, a 23-year-old woman who began taking hormones at 16 to transition to male and started de-transitioning last year, and ‘Mrs A’, the mother of an autistic 16-year-old whose daughter is currently on the GIDS waiting list. Bell now regrets her “brash” [sic]decision to start on puberty blockers, describing it as a misguided attempt to “find confidence and happiness” that may have permanently cost her a chance at motherhood.

Bell began attending the clinic at 14, where she was seen by clinicians just five times before being prescribed puberty blockers. A year later, she began taking testosterone shots – and by the time she realized she was on the wrong path, she had already had her breasts removed.

“I should have been challenged on the proposals or the claims that I was making for myself,” she told the BBC back in March, when a judge first allowed the case to move forward, explaining that she felt incapable of turning back once the clinic visits began, as “one step led to another.”

Bell and Mrs A are concerned by the steep rise in the number of children sent to GIDS. Across England and Wales, 2,700 young people, mostly girls, were referred to the clinic last year, more than 20 times the number seen 10 years ago. Some were as young as 10, and at least a dozen were under 13.

A lawyer for the Tavistock and Portman NHS Foundation Trust, which runs GIDS, dismissed the idea that hormone treatment was damaging to gender-dysphoric children, calling Hyam’s suggestion of a moratorium on hormone blockers without a court order “a radical proposition.” In testimony submitted in writing, Fenella Morris QC suggested the claimants were trying to “impose a blanket exclusion” on under-18s consenting to medical treatment at all.

While Morris defended the injections as “a safe and reversible treatment with a well-established history,” she also attempted to shift responsibility to the University College London Hospitals NHS Foundation Trust and Leeds Teaching Hospitals NHS Trust, which she argued were actually “responsible” for prescribing the hormone blockers. Both institutions will give testimony on Thursday.

With the number of children identifying as transgender having soared over the past decade, this case could have major repercussions for the growth industry of youth gender clinics. Earlier this year, the NHS announced an independent review of puberty blockers and cross-sex hormones, and has since commissioned detailed clinical guidelines for how children are to be evaluated prior to transitioning.