Tropical storm Hanna, which is expected to hit Texas later on Saturday, was upgraded to a hurricane, the US National Hurricane Center (NHC) announced. 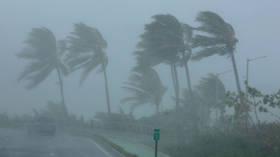 Hanna was located around 145km (90 miles) east-northeast of Port Mansfield, Texas when the announcement was made.

The NHC said it packed sustained winds of 120kph (75mph), adding that it expected the hurricane to strengthen before it makes landfall later on in the day.

Hurricane and tropical storm warnings were in effect along the Texas coastal plain. The forecast said Hanna could bring 15 to 30 centimeters (6 to 12 inches) of rain through Sunday night, with people advised to protect life and property from high water. Tornadoes are also possible.

The NHC also said the hurricane will rapidly weaken after it reaches the US mainland.

Meanwhile, the southern Windward Islands in the Caribbean are expecting the arrival of tropical storm Gonzalo later on Saturday. It will bring gusty winds of up to 65kph (40mph) and heavy rain, with storm warnings announced in St. Vincent and the Grenadines, Tobago, and Grenada.