Audio of Donald Trump seemingly downplaying the Covid-19 virus in February has grabbed the nation’s attention, but top doctor Anthony Fauci has pushed back, claiming he never heard the president play down the pandemic. 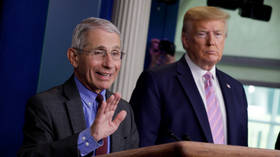 In the audio, which Trump’s critics have been sharing and dissecting, the president tells journalist Bob Woodward that he knows Covid-19 is “deadly stuff,” but he wants to “always play it down” so he doesn’t create a public panic.

“I still like playing it down, because I don’t want to create a panic,” the president says.

Trump also admits that the virus is deadlier than the flu and can be transmitted easily. That very same month, he told citizens the virus is “like the flu.”

Democratic presidential candidate Joe Biden has already capitalized on the recording and called it “beyond despicable” and a “dereliction of duty.”

In an interview with Fox News on Wednesday, however, Dr. Fauci, pushed back on Trump’s critics, saying he has never seen the president minimize the seriousness of the virus – and that he has heard him say similar things about not creating a panic in public.

“He didn’t really say anything different [publicly]than he discussed when we were with him,” Fauci said in reaction.

“Often he would want to, you know, make sure that the country doesn’t get down and out about things, but I don’t recall anything that was any gross distortion in things that I spoke to him about,” he added.

Asked whether he felt the president was downplaying the virus as critics are accusing him of doing, Fauci replied, “no…I didn’t get any sense he was distorting anything.”

Dr. Fauci was assigned to the White House coronavirus task force in January, meaning he would have been working directly with the president while Woodward’s tapes were being recorded.

The nation’s top doctor also disputed quotes attributed to himself included in Woodward’s upcoming book, ‘Rage’, which will reportedly contain more interviews with Trump and other White House officials.

According to a report from the Washington Post, Fauci is credited with saying the president has a “minus attention span” and his “sole purpose is to get reelected,” but Fauci says the quotes must be from “others” and wrongly attributed to him.

Dr. Fauci disputes alleged quotes from him in Bob Woodward’s story that President Trump is “unfocused in meetings” and that “his sole purpose is to get re-elected.” “I don’t recall that at all.” pic.twitter.com/BWG9YgfjXT

In a Wednesday press conference, Trump dismissed Woodward’s book and tape as “just another political hit job.” Asked about accusations he downplayed the virus, the president responded, “you cannot show a sense of panic.”