Donald Trump Jr has been given a “temporary lockout” from his Twitter account after violating the social media company’s “misinformation policy” by sharing a video defending hydroxychloroquine (HCQ) as a Covid-19 “cure.” 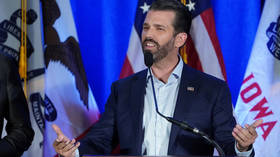 “This is a must watch!! So different from the narrative everyone is running with!” Trump Jr., the president’s eldest son, originally wrote when sharing the video. The clip has been removed repeatedly from social media sites.

PROTECT THIS DOCTORPresident @realDonaldTrump was right about HydroxychloroquineDr. Stella Immanuel said “NOBODY NEEDS TO GET SICK, THIS VIRUS HAS A CURE”She explains how it not only works as a cure but can also be used to PREVENT COVID infectionRT! #Hydroxychloroquinepic.twitter.com/Iwp0hMtfvI

President Donald Trump tweeted the very same video – he has spoken of the antimalarial’s benefits in the past, though studies have shown varying results – and the tweet was removed, but he appears to have not been suspended like his son was, as he has tweeted since then.

Trump Jr’s tweet has been removed from his page as well, and he will not be able to use his account in full for the next 12 hours. He can still send direct messages to followers, but cannot retweet, like, or post his own new tweets.

Twitter said through a spokesperson that this is not a “suspension,” but instead a “temporary lockout.” To end the “lockout,” Trump Jr. must willingly delete the tweet himself. It has been replaced on his page with a message that simply reads: “this tweet is no longer available.” The same message can be found on the president’s Twitter page in place of his own tweet that shared the video.

The video itself was originally streamed by conservative news outlet Breitbart and featured doctors, proclaiming themselves to be ‘America’s Frontline Doctors,’ talking about the benefits of HCQ and claiming masks are not needed to stop the spread of coronavirus. The credentials of some in the video have since come into question, and the video has been actively purged from social media pages for spreading “misinformation” about the current pandemic.

Trump Jr’s Twitter lockout has only added fuel to the fire for people already accusing social media companies of bias against conservatives.

“If you don’t think this is about CONTROL, YOU AREN’T PAYING ATTENTION,” Blaze TV host Sara Gonzalez tweeted in reaction.

The evidence on hydroxychloroquine obviously contradicts the statements in the video. Also, this policy is insanely overbroad. It could have barred pro-masking content in early March, when the medically accepted information was that masks were just for medical professionals. https://t.co/jgiwgCQoRN

Last month, US Attorney General William Barr announced a broad antitrust investigation into big tech companies, including an examination of their online practices, with potential actions likely dropping before the summer is up.