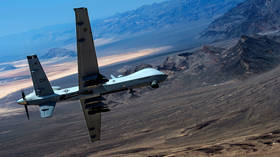 The new directive – announced by the White House on Friday – eases restrictions on the sale of large drones, which were previously classified similarly to cruise missiles and under strict export restrictions. The move marks a significant change to the Missile Technology Control Regime (MTCR), an informal body of rules governing munitions sales to some 35 participating countries.

“Not only do these outdated standards give an unfair advantage to countries outside of the MTCR and hurt United States industry, they also hinder our deterrence capability abroad by handicapping our partners and allies with subpar technology,” the White House said, stressing the need to expand the US drone market and “increase economic security.”

Under the new rules, UAVs that fly at speeds under 800 kilometers per hour – including General Atomics’ Reaper drone and Northrop Grumman’s Global Hawk spy plane – will be reclassified to a lower category, easing restrictions on sales to foreign states.

While the White House argued the MTCR was “in dire need of modernization” as it applies to drones, the rule change is in line with Trump’s long-held position that American weapons deals are a boon to the economy, repeatedly claiming that “over a million” US jobs were created thanks to a series of large sales to Saudi Arabia last year. A report by the Center for International Policy in May suggested those claims were exaggerated, however, finding the deals likely led to fewer than 40,000 new jobs.

More recently, the Trump administration has mulled whether to end congressional review of new weapons deals, according to reports from Reuters and Foreign Policy magazine in June. Though the move has yet to materialize, discussions in the White House were apparently prompted by a showdown with lawmakers last year over sales to Saudi Arabia, which saw the administration declare a national emergency in order to expedite the deals over objections from Congress.