Saying that “a lot of progress is being made” in the Middle East, US President Donald Trump told reporters there will soon be only 4,000 US troops in Afghanistan and 2,000 in Iraq, with only a few in Syria to “guard the oil.” 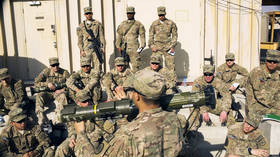 The reductions will happen “very soon,” Trump said. While the Pentagon confirmed the pending withdrawal of some troops earlier this week, this is the first time the US president had mentioned specific numbers.

The numbers did not necessarily correspond with those provided by US Central Command chief General Kenneth McKenzie on Wednesday, however, as CNN was quick to point out. McKenzie said the number would be reduced to 3,000 by the end of September.

Though the US invaded and occupied Iraq in 2003, those forces withdrew by the end of 2011. The current troop presence dates back to 2014, when President Barack Obama sent advisers and some combat elements to help the government in Baghdad after its US-trained forces collapsed before the onslaught of Islamic State (IS, formerly ISIS) militants. All territory claimed by IS in Iraq was liberated during Trump’s presidency, for which he has not been shy to take credit.

While he did not directly link US presence in Iraq to the ongoing confrontation with neighboring Iran, Trump did mention he was confident that Tehran would come to the negotiating table after his re-election in November, as their economy was getting devastated by US sanctions.

Iran launched a missile attack on two bases hosting US troops in Iraq in January of this year, after Trump ordered the drone assassination of Islamic Revolutionary Guard Corps (IRGC) General Qassem Soleimani outside Baghdad.

A small number of US troops had been sent to Syria, against international law and without invitation from Damascus, to aid the Kurdish-led militia that Washington used to fight IS there. Last year, Trump ordered the withdrawal of most of those forces, leaving only a small number to deny the Syrian government access to oil reserves in Kurdish-held territory.

Trump mentioned the troop levels after announcing that Secretary of State Mike Pompeo is headed for Qatar to attend peace talks between the Afghan government and the Taliban militants, scheduled to start on Saturday. The US signed a peace deal with the Taliban in February.

The US invaded Afghanistan in October 2001, after accusing the Taliban government of harboring the Al-Qaeda terrorist organization, which Washington blamed for the 9/11 attacks. While its leader Osama Bin Laden was killed in a US raid in 2011, US troops remained in Afghanistan to prop up the government in Kabul.