President Donald Trump has signed a bill that would allow the US to sanction Chinese officials for the alleged repression of Uighur Muslims in China’s Xinjiang Province. The bill passed Congress with bipartisan support. 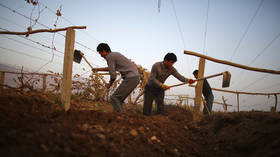 Trump signed the act into law on Wednesday, and a statement from the president accused the Chinese government of the “systematic use of indoctrination camps, forced labor, and intrusive surveillance to eradicate the ethnic identity and religious beliefs of Uyghurs and other minorities in China.”

The president will now have 180 days to submit a report to Congress identifying the officials responsible for these abuses, who will then be subject to sanctions. It also requires the State Department to compile a report on these alleged human rights violations, just as it was required to do under the Hong Kong Human Rights and Democracy Act, a similar piece of legislation passed amid anti-China protests in the semi-autonomous city last year.

China denies operating “concentration camps,” instead claiming that Xinjiang’s Uighurs are held in “re-education” centers, in a bid to clamp down on terrorism in the province.

Hours before Trump signed the bill, former national security adviser John Bolton released excerpts from a forthcoming memoir to the press, claiming that Trump told Chinese President Xi Jinping last year that building the camps was “exactly the right thing to do.”

It is unclear whether Trump expedited the signing to head off any negative publicity from Bolton’s book, which among other gripes, claims that Trump sought Xi’s help to win re-election during a meeting at the G20 summit last June. It is also unclear whether Bolton, who has turned to criticizing Trump since his firing last September, was misrepresenting Xi’s description of the “camps” or not.