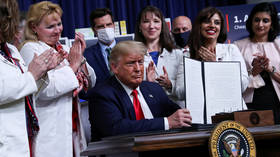 One of the four orders signed on Friday would allow the importation of lower-cost medication from countries like Canada, while another would require drug companies to pass on the discounts secured by hospital and pharmacy buyers and other middlemen to patients.

“These providers should not be receiving discounts for themselves while charging their poorest patients massive, full prices.”

A third order is aimed squarely at lowering insulin prices to what Trump called “pennies” per day, while the fourth order would require drug companies to charge buyers the same prices other countries pay — introducing a “favored nation” clause to stop Medicare paying more for these drugs than foreign healthcare providers. This order, Trump said, would come into effect in August, if pharmaceutical executives fail to reach an agreement with his administration before then.

“We pay for all of the research and all of the development and foreign countries pay absolutely nothing, and our consumer gets charged,” Trump said.

“We are putting patients over lobbyists, senior citizens before special interests, and we’re putting America first,” he added, saying that his actions would lead to a “massive reduction” costs and “completely restructure the prescription drug market.”

Drug prices have skyrocketed in the US since the 1980s, soaring three times higher than the rate of inflation over the last ten years — and multiple administrations and Congress have failed to reel in the increases. A Democrat-sponsored bill aimed at capping costs died in the Senate last year, and a bipartisan bill with similar aims stalled on Capitol Hill since then.

Trump said that his administration could not “wait for Congress to act,” and described his orders as “the most far-reaching prescription drug reforms ever issued by a president.”

However, prices will not fall with the stroke of his pen. The orders will still be filtered through the federal bureaucracy of Washington, and could be challenged in court. Drugmakers have signalled that they are unhappy with the order, with drug lobbying group PhRMA already coming out against drug importation. The conservative FreedomWorks lobbyist group announced this week that they would run a six-figure TV ad campaign decrying the plan as “socialist.”

A group of pharmaceutical executives are due to meet Trump in the White House on Tuesday for talks, with Trump giving the companies a month to “come up with something that will substantially reduce drug prices,” before he implements the fourth executive order.

Americans pay more for prescription drugs than citizens of almost any other country. Lowering drug prices was a key promise of the Trump campaign before the 2016 election.