US President Donald Trump is likely to sign an executive order on policing on Tuesday, his deputy assistant Ja’Ron Smith told reporters outside the White House, as Black Lives Matter protests continue across the country. 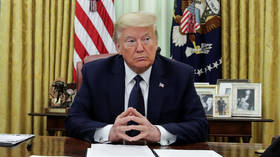 Smith said that family members of victims of police violence may attend the signing, but that he did not want to get “ahead” of Trump on who may or may not attend.

The executive order is expected to contain a number of new initiatives focusing on police reform, such as the creation of national standards for the use of force and tracking police conduct, civil rights attorney S. Lee Merritt told PBS NewsHour on Sunday. It will not include plans to defund the police, as called for by activists, Trump said last week, but will contain recommendations for “tactics for de-escalation.”

“We’ll take care of our police. We’re not defunding police. If anything, we’re going the other route.” Trump said on Thursday, adding that they would ensure police are “well-trained, perfectly trained [and that]they have the best equipment.”

Trump has faced pressure to respond to the outrage generated by the police killings of George Floyd in Minneapolis, Minnesota in May and of Rayshard Brooks in Atlanta, Georgia on Friday. The deaths are just the latest in a long list of black people killed by law enforcement in the US.