Donald Trump’s National Security Advisor Robert O’Brien has tested positive for the novel coronavirus, according to the White House, which added that there’s “no risk of exposure” to the president. 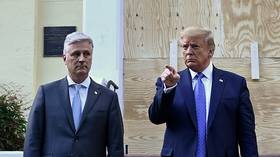 In a statement, the White House confirmed the test results, adding that O’Brien had “mild symptoms.” The head of the National Security Council has been self-isolating and working “from a secure location off-site.”

“There is no risk of exposure to the president or the vice president. The work of the National Security Council continues uninterrupted,” the statement concluded.

O’Brien came down with the virus late last week after a family gathering, according to a Bloomberg source.

The test result makes O’Brien the closest official to Trump yet who has contracted Covid-19, both in terms of seniority and physical distance, as his White House office is near the Oval office.

More than four million Covid-19 cases have been confirmed in the US since the start of the outbreak, according to the Centers for Disease Control, while almost 146,000 people across the country have died.