A Turkish pro-Islam magazine is in hot water after bringing the cause of a caliphate back to life with the cover story of its latest issue. The Ankara bar association has accused it of calling for an insurrection. 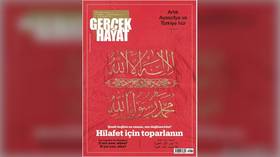 The Turkish legal body filed a criminal complaint against Gercek Hayat magazine, asking prosecutors to investigate it. It alleged that the magazine’s editor-in-chief, Kemal Ozer, and columnist Abdurrahman Dilipak, have instigated hatred and called for an armed rebellion against the Turkish state.

At the center of the accusation is the latest issue of the magazine, published on Monday, which features a cover stating: “Get together for caliphate. If not now, when? If not you, who?” An interview with Dilipak, a veteran Turkish conservative journalist, is one of the lead stories in the edition.

A caliphate is a state dedicated to the cause of Islam, seeking to be a unifying and defending force for all Muslims. The word had received plenty of negative attention in recent times since the terrorist group Islamic State (IS, formerly ISIS) claimed the title for itself.

Historically, four major caliphates existed, the latest being the Ottoman Empire. Modern Turkey was founded by Kemal Ataturk on the ruins of this fourth caliphate as a modern secular republic that had cast away the outdated institutions of its predecessor.

Arguing for revival of a caliphate is a political hot-button topic in Turkey, so the Gercek Hayat publication was met with skepticism even from the conservative side. Spokesman for the ruling AK Party, Omer Celik, said the magazine was seeking “unhealthy polarization” by questioning Turkey’s founding principles.

Some outrage came even before the issue was published, and was based on a preview of the magazine’s cover tweeted by Dilipak. Prominent Turkish journalist Ismail Saymaz said on Sunday that Turkey was not a country “to be ruled by a handful of radicals,” and that the people behind the Gercek Hayat issue “are not even aware of what kind of fire they were playing with.”

Ozer, the magazine’s editor-in-chief, said critics of the story were misinterpreting it. “Our journal demands that the countries of Islam come together, just as Europe has come together and established a union, just as others have made similar ones. Our call has nothing to do with any country,” he said. The release of the issue didn’t seem to appease critics, however.

The Caliphate cover story and the furor that followed comes on the back of Turkey’s decision to convert the Hagia Sophia, one of its national treasures, back into a functioning mosque. Originally constructed as a Christian church, it was converted into an Islam house of worship after Constantinople fell to the Ottomans. Ataturk transformed the building into a museum in 1935.