Regis Philbin, star of ‘Who Wants to be a Millionaire?’ and ‘Live! With Regis and Kathie Lee’, has died at the age of 88, People Magazine reported on Saturday, citing an exclusive statement from family members. 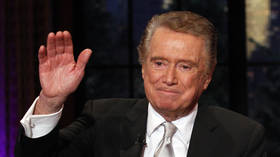 “His family and friends are forever grateful for the time we got to spend with him – for his warmth, his legendary sense of humor, and his singular ability to make every day into something worth talking about,” the Philbin family said in a statement to People Magazine. He died of natural causes.

He ended his run on ‘Live! With Kelly’ in 2011, holding a Guinness World Record for the most time spent in front of a television camera, at 16,343 hours.

RIP the 🐐 Regis Philbin. This clip will forever be iconic. pic.twitter.com/Yv8mFH8gsL

Philbin, who was known for his effervescent personality and his New York accent, had many hilarious television moments, such as donning leotard-like outfits with Ripa and other staffers to recreate Beyonce’s ‘Single Ladies’ music video, getting into an old-fashioned pie fight, and being duct-taped to a wall by his co-host.

A New York native and US Navy veteran, Philbin got into the television business in 1955 as a page for ‘The Tonight Show’. He got his own local talk show in San Diego in 1961, then moved up to network television as Joey Bishop’s sidekick on ‘The Joey Bishop Show’ in 1967. Regis presented local talk shows in Los Angeles and St Louis, before moving to New York in 1982 to become the co-host of ABC’s ‘The Morning Show’ alongside Mary Hart, which was the predecessor to ‘Live! With Regis and Kathie Lee’.