A Texan doctor’s full-blown onslaught of what she called “fixed” science promoted by Big Pharma that hydroxychloroquine (HCQ) does not work has earned her praise and scorn online, with critics delving deep into her background. 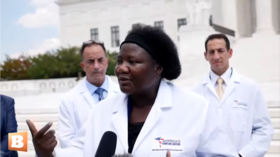 A clip from a press conference by a group of American doctors calling themselves “America’s Frontline Doctors,” starring Dr Stella Immanuel, a self-described primary care physician in Houston, Texas, sparked a ruckus online before it was removed by Twitter on Monday.

PROTECT THIS DOCTORPresident @realDonaldTrump was right about HydroxychloroquineDr. Stella Immanuel said “NOBODY NEEDS TO GET SICK, THIS VIRUS HAS A CURE”She explains how it not only works as a cure but can also be used to PREVENT COVID infectionRT! #Hydroxychloroquinepic.twitter.com/Iwp0hMtfvI

In the video, which was retweeted by US President Donald Trump and many conservative pundits, Immanuel said that she first used the drug to treat malaria patients in Nigeria, where she received her medical training, but has now been successfully using the medicine to treat Covid-19 patients in Texas and as a prophylaxis. 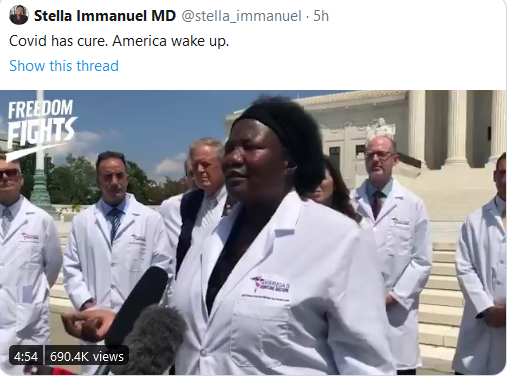 Immanuel claimed that she has treated over 350 coronavirus-stricken patients so far, including those with underlying health conditions such as diabetes, high blood pressure, asthma as well as elderly people – and that not a single one of her patients had died.

This virus has a cure. It is called hydroxychloroquine, zinc, and Zithromax. I know you people want to talk about a mask. Hello? You don’t need a mask. There is a cure.

An assortment of studies have been carried out recently to determine whether HCQ could be helpful in treating the disease – with varying results. The latest research, however, appeared to dampen hopes that hydroxychloroquine might become the long-sought-after cure. Earlier this month, the World Health Organization (WHO) suspended clinical trials of the drug for the second time, citing its alleged ineffectiveness, while a newly-released German study found that chloroquine did not inhibit the spread of the disease in human lung cells.

While the HCQ has been promoted by Trump, who said in May that he had been taking the drug “every day” as a prophylactic, the treatment is not FDA-approved for use outside of the hospital setting for patients who already have Covid-19 due to “risk of heart rhythm problems.”

Immanuel, however, appeared to argue that surveys portraying the drug as useless at best, and dangerous at worst, are a Big Pharma fraud.

So if some fake science, some person sponsored by all these fake pharma companies comes out to say, “We’ve done studies and they found out that it doesn’t work,” I can tell you categorically it’s fixed science.

Doctors who are hesitant to prescribe the drug, she argued, are no better than “the good Nazi… that watched Jews get killed and… did not speak up.” Immanuel said that she’s been bombarded by “all kinds of threats” but added that she won’t give in to the pressure.

“You can report me to the bots, you can kill me, you can do whatever, but I’m not going to let Americans die.”

While the doctor’s spirited tirade has drawn praise from many Trump supporters, skeptics have questioned her medical credentials and those of the group she represents. Some pointed out that the website for “America’s Frontline Doctors” appears to have been launched less than two weeks ago.

#Hydroxychloroquine The America’s Frontline Doctors website has no group info, offers no POV and was registered only 12 days ago. Nice try. pic.twitter.com/ERSfadryWh

Others took issue with the fact that Immanuel is a minister in the “Fire Power Ministries with Dr Stella Immanuel,” which is apparently at the same place where her medical center is located.

People posting this Dr. whose going loose about how #Hydroxychloroquine works. Took 3 mins to look her up. Yes, she’s a doctors. But…there’s more. pic.twitter.com/WyLrDurSbJ

Here’s the apparent storefront for her clinic at 6718 Hwy 6 S, Houston, TX 77083 — conveniently located in the same strip mall as her “Fire Power Ministries.” Let’s trust this one instead of Dr. Faucci. 😑 pic.twitter.com/GsMF4VcB4e

Shortly after her fierce speech went viral scoring hundreds of thousands of views, Immanuel tweeted that her Facebook page and videos had been removed.

Hello Facebook put back my profile page and videos up or your computers with start crashing till you do. You are not bigger that God. I promise you. If my page is not back up face book will be down in Jesus name.

Since the start of the pandemic big US-based social media platforms have been forcefully removing all Covid-19 content that they deem to contain misinformation about the disease. While few people criticize the fight against false information itself, its implementation has been far from perfect. Some accurate content got axed while obviously unhinged conspiracy theories remained untouched by the digital censorship.

Adding fuel to the fire is the reality that Covid-19 and ways to fight it has become a highly politicized issue in the US. Facebook this month banned a group dedicated to opposing CDC’s recommendation to wear face masks in public.