Kentucky’s Nicholas Sandmann celebrated his 18th birthday on Friday by notching his second victory against the mainstream media for defaming him, providing pushback in a world where false reporting seems to always go unpunished. 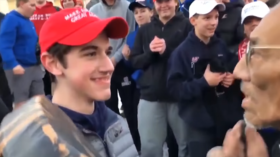 The former Covington Catholic High School student announced a settlement in his $250 million lawsuit against the Washington Post on Twitter. As in the January settlement of a similar defamation suit against CNN, the terms weren’t disclosed, and Sandmann said he has more work to do.

“The fight isn’t over… two down, six to go,” he tweeted, referring to lawsuits against six other media outlets. “

He has lawsuits pending against ABC, CBS, the New York Times, Rolling Stone magazine and Gannett, the owner of USA Today and the Cincinnati Enquirer.

We have settled with WAPO and CNN. The fight isn’t over. 2 down. 6 to go.Don’t hold your breath @jack.

The Washington Post issued a statement saying, “We are pleased that we have been able to reach a mutually agreeable resolution of the remaining claims in this lawsuit.”

Sandmann’s lawyer, Lin Wood, echoed his client’s forward-looking reaction. “You deserve justice,” Wood said. “We all deserve justice. By this time next year, justice will be ours.”

The Sandmann settlements mark rare cases of mainstream media outlets paying a price for publishing false reports that fit its political agenda. US laws make it difficult to push back legally, especially in the case of public figures, who must prove malicious intent and a “reckless disregard for the truth” to win libel judgments.

But the CNN and Washington Post suits also may reflect a trend of fighting back, at least in the case of people who aren’t famous or holders of public office.An appellate court in New York earlier this month reinstated a defamation lawsuit against MSNBC host Joy Reid.

In that case, Reid falsely interpreted a photo of a Californian woman speaking with a Hispanic boy to suggest that the incident was a racist attack. Both the woman, Roslyn La Liberte, and the boy said afterward that they were having a civil conversation. La Liberte, predictably, was branded hateful and attacked.

Do your thing Twitter!!!! Make her go viral!! #Twitter#racism#RACISTS#RoslynLaLiberte#1Voice#FamiliesBelongTogether#FBResistance#FBR She stood their allowing this child to be harassed!! #Viralpic.twitter.com/r7Ry9yTalC

In the UK, Harry Potter author JK Rowling threatened a lawsuit after a children’s news service called her comments “transphobic” and suggested a boycott of her books. The news service, called The Day, issued an apology on Wednesday and pledged to make a donation to a charity of Rowling’s choice.

The Sandmann controversy began after students from his all-boys Kentucky school took a class trip to Washington to participate in an anti-abortion march in January 2019. The students met up at the Lincoln Memorial and were waiting for their bus to return home when they were confronted by a group of Black Hebrew Israelite demonstrators, who hurled racist and homophobic insults at the boys for nearly an hour.

They boys then asked a chaperone if they could perform one of their pep rally chants to drown out the expletives. A group of Native American activists, led by Nathan Phillips, responded by coming toward the boys and banging drums. Phillips later claimed falsely that the boys blocked his escape path.

A short clip used by CNN and other media showed Phillips beating a drum in Sandmann’s face. The student, wearing a Make America Great Again hat, stood still, looking at Phillips and at one point smiling to show“I was not going to become angry, intimidated or be provoked into a larger confrontation.”

The media interpreted the encounter as predominantly white students racially harassing the American Indian group. Sandmann, in particular, was pilloried for allegedly mocking “Native American elder” Phillips with his “smirk.” A week after the incident, when some media outlets had already issued corrections in light of longer videos that showed more fully what happened, the Washington Post published a column titled, ‘Time to take on the Covington smirk’.

Time to take on the Covington “smirk” https://t.co/6Ivswdfb24

The media coverage prompted a flood of death threats against Sandmann and his classmates. Even a journalist, INE Entertainment’s Erik Abriss, wished death on the students and their parents. Their school was closed temporarily out of fear for the children.

But Sandmann fought back, doing an interview on NBC’s Today Show to tell his side of the story. He graduated from Covington in May, tweeting: “After being told I would never get into college and my life was done, I’ll be going to an amazing school on scholarship. Don’t back down and keep winning.”