The judge noted the two friends had gone away for breast enhancement surgery and questioned if that was essential travel.

TWO WOMEN ARRESTED at Dublin Airport for refusing to go to a quarantine hotel after returning from a “boob job” trip to Dubai have been held in custody on strict bail.

Mother-of-two Kirstie McGrath, 30, with an address at St Anthony’s Road, Dublin 8 and Niamh Mulreany, 25, a mother-of-one from Scarlett Row, Essex Street West, Dublin 2 were arrested on Friday afternoon at Terminal 2 after coming back from the United Arab Emirates.

Defence Forces personnel called gardai who brought them to Ballymun garda station and charged them with breaking the Health Act. They deny the charges and appeared before Judge Miriam Malone at Tallaght District Court on Saturday.

The judge noted the two friends had gone away for breast enhancement surgery and she questioned if that was essential travel.

“Colloquially referred to as a boob job”, she later said of their medical procedures, as the reasons for their trip emerged.

The court heard gardai spent almost two hours trying explain the regulations to the women who claimed they did not know about the law change.

They pleaded for bail with their solicitor Michael French citing humanitarian grounds.

He said they had children to care for and were not aware of the regulations. They had also provided three negative Covid-19 tests in the last week and could quarantine at home, he argued.

He also said they will contest the charges and contended that it was a relatively minor offence with serious ramifications.

A challenge to the constitutionality of the law will be taken, he said.

He submitted that people with Covid-19 were allowed quarantine at home and were not subject to the same restrictions as the hotel quarantine measures travellers faced.

He submitted that they did not have the funds for the quarantine fees and that refusal of bail was disproportionate for an offence which carries a one-month jail term.

This means, the defence argued, that they will not be able to take up the bail until Tuesday when banks are open again.

Gardai were alerted on Friday afternoon by the State Liaison officer after the two friends flew in from the UAE and allegedly refused to agree to comply with go to a quarantine hotel.

A payment of the €2,500 fee for their accommodation was also sought, the court heard.

Breaking new 14-day hotel quarantine law for travellers arriving in the State can result in a €2,000 fine and a sentence of up to one-month in jail.

The measure was introduced to prevent the spread of coronavirus and is mandatory for people arriving from 58 states or if they have not had a negative Covid-19 test taken within 72 hours.

Garda Inspector Luke Lacey, of Dublin Airport Garda station, said there were objections to bail due to their failure to comply with the statutory travel regulations introduced to avoid the spread of the disease.

Releasing them would make a “mockery of the Act”, he argued. He told the court that “extraordinary times required extraordinary measures”. 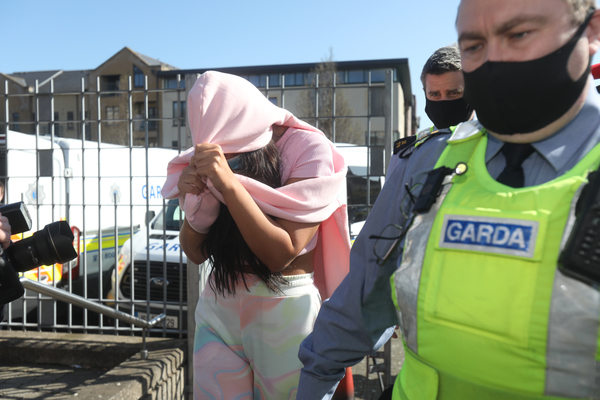 The women’s solicitor says they would be challenging the constitutionality of the law.

Distraught Kirstie McGrath was called in first. She wept throughout the hearing and at times shielded her face from the public gallery.

He arrested her at 2.50pm, after he spent one hour and 50 minutes outlining the rules and giving her an opportunity to make phone calls for advice, he said.

“It was explained in ordinary language what would happen if she did not go to the quarantine hotel,” Garda Barber said.

She was also told state liaison officers would be at the hotel to explain the process but she refused to go, it was alleged.

Mr French said the rules were an erosion of his client’s constitutionality. She was entitled to bail and like her friend had no warrant history, and would comply with conditions at home, he submitted.

He explained that Ms McGrath had gone once to Dubai for cosmetic surgery but his client did not want to say it in open court.

A note was handed in and the judge read it and said it was for the purpose of breast enhancement, adding, “that is essential travel?”

Garda Karl Connor told the court that Niamh Mulreany also made no reply to charge. It was alleged he spent one hour and 45 minutes explaining the terms and he was also given a chance to get advice.

Mr French said that Ms Mulreany was on the lone parent’s allowance and needed to care for her child. Exceptions to the regulations are allowed and she could abide by conditions and remain in her home, he suggested.

He told the court that like her co-accused, Ms Mulreany had three negative covid tests in the last week, one in Dublin before she flying out to the UAE and twice before she returned.

Judge Walsh noted Ms Mulreany had also gone for breast enhancement or modification surgery and she quipped, “Colloquially referred to as a boob job”.

Both were supported by family members in the public gallery. The two women did not address the court.

A pandemic was raging around the world and laws have been enacted which must be complied with, the judge warned.

They were remanded on their own bonds of €800 each and they must lodge €500 cash.

The judge also required independent sureties to be approved in each case, set at €2000 of which €1800 must be lodged and €200 has to be frozen in their bank accounts.

The defendants must surrender passports with immediate effect. Once the bail money is organised they can be released and must remain at government allocated hotels for 14 days unless they provide a negative PCR test after 10 days.

The two women must remain contactable by phone and not leave the jurisdiction except for essential travel. The cases will resume on April 9 next at Dublin District Court.