UK Foreign Secretary Dominc Raab has been forced to apologize after he put his foot in it by bizarrely (and mistakenly) claiming the phrase “take a knee” came from tv drama Game of Thrones. 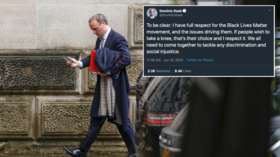 When asked whether he would “take the knee” in support of the Black Lives Matter movement during a Thursday interview with talkRadio’s Julia Hartley-Brewer, Raab said he would only genuflect for the Queen and his wife while also wondering aloud whether the entire concept had been “taken from the Game of Thrones.”

Shortly after the deafening sound of Britons across the nation facepalming had died down, Raab clarified his comments.

To be clear: I have full respect for the Black Lives Matter movement, and the issues driving them. If people wish to take a knee, that’s their choice and I respect it. We all need to come together to tackle any discrimination and social injustice.

The furor saw ‘Game of Thrones’ and ‘Dominic Raab’ rocket to the top of the UK Twitter trending charts as people heaped scorn on the hapless foreign secretary.

Many saw the apology as a rather poorattempt at damage limitation and backpedalling. Others, like Brexit Party leader Nigel Farage, went on the offensive, seeking additional clarification after Raab’s updated stance regarding taking a knee. “Do you have full respect for defunding the police and dismantling free market capitalism?” Farage asked the foreign secretary.

Do you have full respect for defunding the police and dismantling free market capitalism? Those are the aims of the Black Lives Matter movement. https://t.co/FR2mYrxCWE

Some apparently drew inspiration from the popular HBO series, of which Raab was a fan, and took the opportunity to stick the knife in just a bit, criticizing the foreign secretary for a perceived “non-apology.”

Martin Luther King in the season premier of Game of Thrones (For those not fully up to speed with the crass ignorance of our government here’s an explainer. https://t.co/uaUdo9Xczz) pic.twitter.com/lQglGITkCZ

Raab is no stranger to high-profile gaffes, previously arguing that “no one gives a toss” that the Conservative Party sneakily rebranded one of its Twitter accounts as a fact-checking account and famously forgetting his own constituency during the UK general election.