Britain’s test and trace system is “on the verge of collapse,” Shadow Cabinet Office Minister Rachel Reeves has said. But the government says it’s because too many people without coronavirus symptoms want tests. 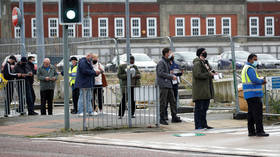 “People are being sent on a wild goose chase around the country for a Covid-19 test,” Reeves told Sky News.

Despite a spike in coronavirus infections, those keen to get tested have been met for several days with an error message on the government website, informing users that the “system is currently unavailable.” The head of testing at Whitehall’s Test and Trace operation earlier said that laboratories processing tests had reached a “critical pinch-point.”

But Health Secretary Matt Hancock said on Wednesday that part of the problem is that too many people getting tests are “not eligible” for them.

The proportion of those asking for tests who have no symptoms has risen to 25 percent, according to Hancock. “You are eligible for a test if you have symptoms of coronavirus or if you have a very specific reason otherwise,” he said. However, people without symptoms are getting tested.

Labour has accused the government of “failing to get even the basics right” and “blaming everybody but themselves.” Reeves said that this is a government who promised a “world-beating system.”

“Frankly, at the moment, we would just like one that works, and we don’t even have that,” the shadow minister added.

Hancock admitted it could take weeks for the problem to be fixed. He cited the sharp rise in cases, which rose by 2,460 on Monday, with a further 32 deaths, taking the total to 41,586.