Northern Ireland’s First Minister said the vaccination rate in the Republic has an ‘impact’ as neighbours.

ANY SURPLUS CORONAVIRUS vaccines in the UK should be offered to the Republic of Ireland, Arlene Foster has said.

By Sunday, more than 850,000 Covid-19 vaccines had been administered in Northern Ireland.

Foster said more than 50% of the adult population have received their first dose.

Health Minister Robin Swann said he hopes that the Republic will “catch up” within a month.

Foster said she discussed the issue with UK Prime Minister Boris Johnson when he visited a vaccination centre in Fermanagh earlier this month, and pledged to continue that conversation.

“I think he does understand the difficulties, particularly around border areas and the movement of people in relation to vaccination,” she said.

If there is surplus vaccine then we should share it with our nearest neighbours out of neighbourliness but also out of the fact it will have an impact of course on us here in Northern Ireland, so there’s a very practical reason why I believe that should happen.

Foster received her first dose of the vaccine at the weekend. Today she commented that apart from a sore arm, she felt well.

Deputy First Minister Michelle O’Neill said she would like to see more co-operation. 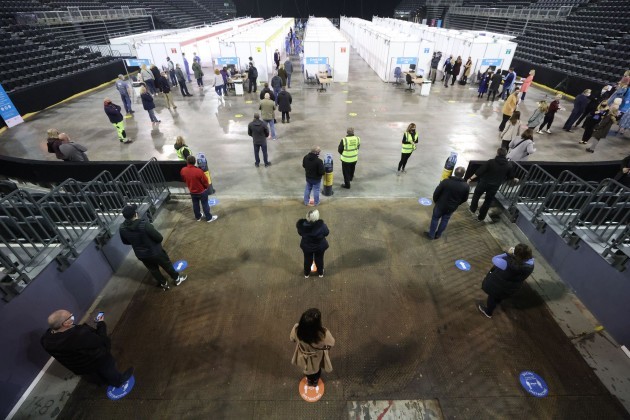 “What happens across these two islands has implications because we move freely across the two islands, so it is crucially important that we have an all-island approach to dealing with vaccination rollout,” she said.

“It’s the right thing to do, it’s the good thing to do. It’s responding to a global pandemic and we are all in this together, so we need to work together in order to protect our people. I would like to see a lot more co-operation as we come out of this period and into the future.”

Swann said offering vaccine surplus to the Republic of Ireland was the “right thing to do”.

“My responsibility is to the people of Northern Ireland so, as of our operation here today, my key aim is to get as many people in Northern Ireland vaccinated as quickly as possible,” he said.

“We hope to have everyone receive their first vaccination by the end of July.

“In the Republic of Ireland, I’ve heard the Taoiseach say they hope to catch up in a couple of weeks or a month’s time, so that’s something we would like to see.”

He described the difference in vaccine rates as “simply down to supply chains”.

“We’re part of the UK pre-bought programme which bought into seven different vaccine sources even before they had been authorised, and the Republic has tied in with the European Union’s vaccine purchasing programme, and we’re seeing the challenges that has brought but we’re also hopeful that any difficulties between the UK and EU or Oxford/AstraZeneca will be ironed out and ironed out very soon, because this shouldn’t be about politics, this is about public health,” he said.

There were reports in a Sunday newspaper that UK ministers were working up plans to share 3.7 million doses with the Irish Republic.

Speaking at the weekend, Irish Foreign Minister Simon Coveney said: “There isn’t an offer that I’m aware of, or that the Government’s aware of, from the UK.”