UK Chief Scientific Adviser Sir Patrick Vallance reportedly holds a bonus of tens of thousands of shares in a pharma giant developing a Covid-19 vaccine for the government. Yet, London says there is no conflict of interest. 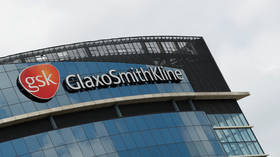 Vallance, who also chairs the government’s expert advisory panel on vaccines, appears to have retained over 43,000 shares in GlaxoSmithKline (GSK) – a UK-based multinational pharmaceutical company – worth £600,000, The Telegraph reported.

The shareholding appears to be the legacy of his previous job as the head of research and development at the very same company. Over his tenure from 2012 to 2018, Vallance accumulated a total of 404,201 GSK shares worth a whopping £6.1 million in his hands, according to the British media.

However, he sold more than £5 million worth of shares after being appointed to the government. GSK, meanwhile, has entered the global race to provide the world with a vaccine against coronavirus – alongside some 20 other drug manufacturers and research centers. The endeavor might prove quite lucrative, should the company succeed.

The pharma giant working together with another drug manufacturer – Sanofi – has already struck deals with the UK and the US governments to supply them with a Covid-19 vaccine in case its efforts are fruitful. The contract would see GSK providing as many as 60 million doses to the UK and 100 million doses to the US. Washington already reportedly paid the two companies £1.65 million to accelerate their efforts.

Since it received the government contracts, GSK’s share price rose by some two percent. Vallance has meanwhile been busy ensuring that the UK would get enough vaccine doses if GSK is successful and contributing to the vaccine development efforts.

Earlier this week, he said that the first doses could be ready as early as by the end of this year, warning, however, that the first half of 2021 would be a more realistic prospect.The revelations sparked suspicions of a potential conflict of interest.

However, Health Secretary Matt Hancock denied the possibility of this. “No, there are rules around these kinds of things and I’m sure that Sir Patrick has been fully advised by them,” he told LBC Radio. “If you know Sir Patrick Vallance as I do, any suggestion that he is doing anything other than his level best to try and tackle this virus is wrong,” he added.

A government spokesman confirmed that Vallance holds a deferred share bonus that would mature in April 2021 without revealing its exact value. The spokesman also said that “appropriate steps were taken to manage the government chief scientific adviser’s (GCSA) interests in line with advice provided at the time.”

He added that the chief scientific adviser also has “no input” into the commercial decisions on vaccine procurement, which are taken by the government following a “robust” approval regime.

The developments come as the UK braces for a second wave of coronavirus. The number of new cases is on the rise once again and some places in the UK witness it increasing at a pace not seen since the peak of the epidemic in spring.

More than 6,100 people were confirmed to have contracted the disease overnight and Hancock said that up to 10,000 people might get ill a day. The situation prompted London to introduce a new set of restrictions, which according to Prime Minister Boris Johnson might stay in place for up to six months.

Some companies, including the British-Swedish AstraZeneca are meanwhile seeking emergency approval for their vaccines from the relevant regulators.