Despite growing pressure for a ‘circuit breaker’ lockdown, British Prime Minister Boris Johnson said his latest Covid strategy was the right one to avoid another national lockdown. 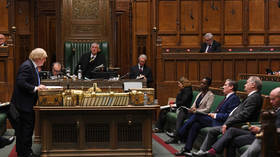 Speaking to Parliament on Wednesday, the prime minister told lawmakers he was following scientific advice and his regional lockdown approach was the right one. “The whole point is to seize this moment now to avoid the misery of another national lockdown,” Johnson said, adding that he “rules nothing out” in combating the virus.

Johnson was responding to opposition leader Keir Starmer, who, at Tuesday’s Prime Minister’s Questions, called for a nationwide circuit breaker lockdown. The Labour leader accused the PM of ignoring the science after the Scientific Advisory Group for Emergencies advisory group, known as SAGE, recommended a two-week shuttering of the country to curb the new pandemic outbreak.

Westminster has come under fire from all sides this week. Liverpool Mayor Joe Anderson has opposed many of the new measures imposed on his city, particularly the closing of gyms, claiming they are “safer than supermarkets.”

Johnson, however, argued on Wednesday that places such as Cornwall and North Norfolk are not seeing a surge in cases and that a nationwide lockdown does not reflect the situation across the whole country.

Following Johnson’s announcement of a three-tier lockdown system on Monday, only Liverpool and Merseyside have seen the highest-level restrictions imposed. Intensive care beds in the northern city are reportedly 95 percent full, as infections soar.

Some critics, including Brexit Party leader Nigel Farage, have claimed that Johnson has lost control of the country, after videos of crowds gathering in the streets of Liverpool just hours before new lockdown measures came into force emerged on Tuesday night.

Reports have also appeared that gym owners in Liverpool and Merseyside will defy lockdown measures and stay open, claiming the government’s decision to close gyms was “irrational.”

The UK is once again one of the most Covid-afflicted countries in the world. On Tuesday, the National Health Service reported 143 Covid deaths – the highest since June. The number of new infections recorded in the past 24 hours was 17,234, bringing the total cases since the pandemic began to 634,920.