The British admission that UK legislation implementing the EU divorce treaty could break international law in a “limited way” proved to be a truly “kamikaze” statement that backfired spectacularly, Ireland’s deputy PM has said. 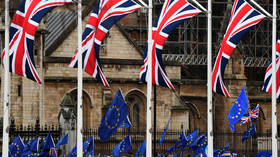 “These were really extraordinary comments, and certainly set off alarm bells in Dublin. I think they have backfired,” Ireland’s deputy prime minister, Leo Varadkar, said on Wednesday while speaking to RTE.

On Tuesday, the UK’s Northern Ireland minister, Brandon Lewis, admitted that Britain could break international law in a “limited way” with its new legislation linked to the implementation of its Withdrawal Agreement signed with the EU early this year. The statement triggered something of a diplomatic meltdown among the other parties to the agreement.

Such rhetoric effectively sounded like a new thinly-veiled threat from the UK, Varadkar said, and quite in line with Westminster’s general Brexit negotiations strategy.

“Certainly, the strategy and behavior of the British government was one of brinkmanship, was one of threatening to crash out… if we don’t get to an agreement we might go kamikaze on you, that sort of thing,” Varadkar said.

There can be no trade agreement with the EU in “circumstances where the UK government is not honoring the withdrawal agreement,” he warned. However, he believes London is still likely to seek a compromise.

“I think they want a deal,” Varadkar stated. “It would seem that the sticking points are around fisheries, which is going to be a very difficult one, and also around state aids.”