The United Nations has denounced heavy-handed police tactics used against demonstrators in Portland and other US cities during ongoing protests, taking aim at what it called baseless arrests and unnecessary violence by officers. 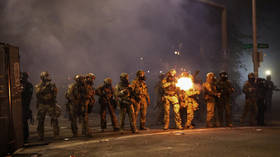 “Peaceful demonstrations that have been taking place in cities in the US, such as Portland, really must be able to continue without those participating in them… risking arbitrary arrest or detention, being subject to unnecessary, disproportionate or discriminatory use of force, or suffering other violations of their rights,” Liz Throssell, spokesperson for the UN’s Office of the High Commissioner for Human Rights (OHCHR), said on Friday.

Among dozens of locations to see heated police brutality demonstrations in recent weeks, Portland has lately taken the spotlight, with federal agents deployed to the city under authority from the White House to put down unrest and vandalism. The protests have rocked Portland for more than 50 consecutive days, seeing regular clashes with law enforcement as demonstrators gather outside a federal courthouse night after night.

While federal authorities say “violent anarchists” are to blame for escalating the protests, activists – as well as Portland Mayor Ted Wheeler – argue the agents are at fault, insisting the demonstrations only ignited into serious unrest after they were deployed to the city.

Throssell also voiced concerns about reports that unidentified officers were ‘kidnapping’ protesters off Portland’s streets at random, noting this could “place those detained outside the protection of the law, and may give rise to arbitrary detention and other human rights violations.” The Customs and Border Protection agency, one of the federal bodies deployed in Portland, has rejected the ‘kidnapping’ allegations, maintaining that its agents wear clear identification and only detain those suspected of crimes.

An Oregon district judge appeared to challenge that claim on Thursday, however, issuing a restraining order barring federal agents from arresting or wielding force against journalists and legal observers. Without the injunction, the judge said agents would continue to “target” reporters, even when they “are not engaged in any harmful or illegal conduct.”

Protesters who do experience “unnecessary or excessive use of force” from police must have some means of recourse, the UN spokeswoman went on, calling for “prompt, independent, impartial and transparent investigations into any allegations of human rights violations.”

As the demonstrations rage on in Portland and elsewhere, Throssell said the UN’s Human Rights Committee will issue a guidance covering “physical and online protests, public order, and the work of the media” next Wednesday.