Tokyo has sent a strong rebuke to South Korea over a sculpture allegedly showing Japan’s current prime minister “apologizing” for the nation’s crimes during WWII. It could leave a dent in bilateral relations, Tokyo has warned. 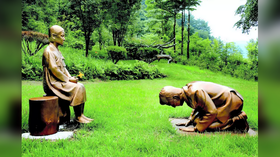 Japan’s Chief Cabinet Secretary Yoshihide Suga said that if the reports about the newly-erected statue symbolizing Prime Minister Shinzo Abe are true, it would be “unacceptable under international courtesy.” This will have “a decisive impact on Japan-Korea relations,” he stated.

The artwork, titled ‘Eternal Atonement’ or ‘A Heartfelt Apology,’ was commissioned by a private botanical garden in the South Korean city of Pyeongchang. The sculpture is of a life-sized young girl seated on a bench, and a man kneeling and bowing in front of her.

It symbolizes the pain of the so-called ‘comfort women’ – Korean women forced to work in brothels for the Japanese military during WWII. Similar statues of girls have been erected across the country, including one purposely placed outside the Japanese Embassy in South Korea’s capital Seoul.

South Korean media and online commenters described the kneeling figure in Pyeongchang as depicting Abe. The statue’s sculptor was quoted by the local press as saying that the work symbolizes the need for “the head of Japan” to apologize. He also told Japanese newspaper Asahi Shimbun that “it would be better if the responsible person apologizes.”

The head of the botanical garden, Kim Chang-ryeol, however, told the Japan Times that the sculpture did not symbolize Abe, and the kneeling figure could mean “any man that has to apologize to the girl,” including “her father or just any man that you could imagine.”

The whole of Korean Peninsula was a Japanese colony from 1910 to 1945. Up to 200,000 Korean women and girls are believed to have been forced to work in the Japanese Army-run brothels. This remains a contentious issue between Seoul and Tokyo, as South Korea seeks repentance and financial compensation from Japan.