Joe Biden was slammed as “unhinged” by critics following an interview in which he compared US President Donald Trump to both Fidel Castro and infamous Nazi propagandist Joseph Goebbels in the space of less than a minute. 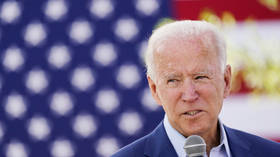 Asked by MSNBC’s Stephanie Ruhle about voters believing Trump’s frequent accusations that Biden will push a socialist agenda as president, the former vice-president said he wasn’t sure if there was anyone voting for Trump who hadn’t already made up their mind.

“But who knows. He’s sort of like Goebbels. You say the lie long enough, keep repeating it, repeating it, repeating it, it becomes common knowledge,” he said, arguing that Trump was using the “socialist” attacks to “scare and distract” voters. He also accused him of “embracing dictators around the world” and then compared him to the late Fidel Castro.

WATCH: In the space of less than a minute, Joe Biden compares Trump to Goebbels and Fidel Castro. pic.twitter.com/nQWqHoQnfM

Comparing a democratically elected president to one of Adolf Hitler’s closest allies (and propaganda minister) in the Third Reich, and the socialist Cuban leader who served for decades, didn’t go down well with Trump supporters on social media, many of them accusing Biden of being “unhinged.”

“Goebbels helped carry out the systematic murder of more than six million Jewish people. This is a disgusting thing for a politician to say,” Daily Caller writer David Hookstead tweeted.

“You don’t expect me to share a debate stage with GOEBBELS?” – Biden, soon. https://t.co/uqTWSZ7fg0

In the same Saturday interview, Biden claimed he would debate the president on Tuesday, despite critics predicting otherwise and even people in his own party, including Rep. Nancy Pelosi (D-California), saying he shouldn’t. Biden insisted he would take part in the debates because Trump is “not very smart” and a “liar.”