A US Air Force pilot has been found dead after their jet plummeted into the North Sea during a routine training mission. The plane’s wreckage was found hours after the crash by the UK’s coastguard service. 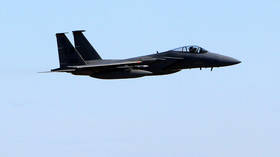 The fighter jet, identified as an F-15C Eagle, crashed on Monday morning. The aircraft was assigned to the 48th Fighter Wing based at RAF Lakenheath in Suffolk, England.

A @usairforce F-15C Eagle crashed at approximately 0940 today in the North Sea. The aircraft was from the 48th Fighter Wing, the aircraft was on a routine training mission with one pilot on board. https://t.co/1Psg3N1JCz

The cause of the accident is unknown, according to a statement issued earlier by the Air Force.

British search and rescue teams deployed to the scene came across the wreckage of the aircraft before later recovering the body of the pilot.

In a statement confirming the death, RAF Lakenheath said “our deepest condolences go out to the pilot’s family and the 493rd Fighter Squadron.” They said the service member’s name would not be released until their family has been notified.