Washington has banned certain Chinese graduate students and researchers from entering the US to supposedly protect “sensitive” research from being “appropriated” by Beijing, as relations between the two nations continue to sour. 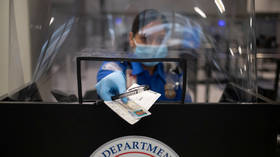 Adding to mounting tensions, the US has once again accused China of attempts to get its hands on America’s state-of-the-art technologies and innovations, including coronavirus research, as it continued its crackdown on students and academics who it says might be linked to the Chinese Army.

“We are blocking visas for certain Chinese graduate students and researchers with ties to China’s military fusion strategy to prevent them from stealing and otherwise appropriating sensitive research,” the acting head of the US Department of Homeland Security, Chad Wolf said on Wednesday. He added that China is “abusing” US student visas to “exploit” American academia.

Wolf did not provide any details on who exactly was barred from entering US territory and how many people were affected by the new restrictions. Later, however, the US State Department said that more than 1,000 visas of Chinese nationals were revoked by Wednesday.

The department’s spokesperson told Reuters, though that the US would continue to “welcome” those she called “legitimate” students and scholars not contributing to China’s “goals of military dominance.”

Earlier, media reports suggested that students flying back to China were subjected to increased scrutiny and screening by US security officials over potential technology theft.

US security services have been hunting for supposed ‘spies’ among Chinese researchers working in America for quite some time. In July, the FBI said that Chinese scientists with secret military ties were working in dozens of US cities. Four such researchers accused of concealing their military past were then arrested on charges of visa fraud.

The US and China have also been bickering over journalists’ visas. In March, Washington slashed the number of Chinese nationals allowed to work in US offices of major state media from 160 to 100. It also designated five of China’s state media outlets as foreign agents, eventually forcing 60 journalists to leave the country.

In response, Beijing expelled a dozen American reporters working for the New York Times, Wall Street Journal, and Washington Post. Most recently, it also held off on extending some other US reporters press credentials and visas, sending them letters stating they would be allowed to continue working in China on expired visas for about two months.