No one wants to give Iran the opportunity to buy and sell weapons, Washington has claimed, arguing that regional security would suffer if an arms embargo on Tehran is allowed to expire. 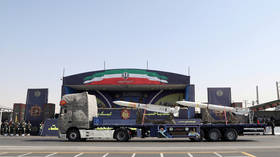 There is no desire to give Iran a chance to enter the arms trade, US Special Representative for Iran Brian Hook said on Sunday. He supported the rather presumptuous claim by insisting that the conflict in Syria would worsen if the current weapons embargo on Tehran is lifted. The official accused Iran of bypassing international restrictions and warned that Middle East peace would be threatened if the current sanctions were loosened or done away with.

Washington has repeatedly called on the international community to extend the arms embargo, which is set to expire in October.

US Secretary of State Mike Pompeo warned earlier this week that China would begin selling weapons to Tehran once the restrictions expire.

“They have been working on it, waiting for this day, waiting for midnight on October 18 for this arms embargo to expire,” Pompeo said on Wednesday.

The embargo on conventional arms dates back to 2010 when the UN Security Council took action after Iran declined to grant UN inspectors full access to its nuclear facilities. The 2015 Joint Comprehensive Plan of Action (JCPOA), colloquially known as the Iran nuclear deal, stipulated that the embargo would be lifted after five years. The JCPOA provided greater oversight of Iran’s nuclear program in exchange for the removal of international sanctions.

Washington unilaterally withdrew from the accord in May 2018, and soon after began re-imposing sanctions. The move was widely criticized by America’s European allies. Iran has slowly begun to pull out of its commitments under the accord, arguing that it is under no obligation to keep its side of the bargain if the agreement’s other signatories refuse to honor their own promises.