The US Ambassador to Seoul shaved off his mustache on Monday after a lengthy wrestle with local media, which resented its Japanese colonial-era look. However, the diplomat denied that it was public opinion that forced his shave. 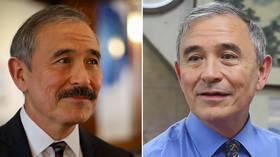 Having facial hair can be a factor of irritation in international relations, as the US envoy in South Korea has learned lately.

South Korean media repeated relentlessly – ever since Harris took his post last June – that his mustache was reminiscent of the fashion adopted by Japanese governors-general during those decades.

To make things worse, 40-year-old Harris was born in Japan and is of part-Japanese origin. Still, he resolutely denied that his mustache had anything to do with political sympathy and was a matter of his personal choice.

He explained that was the only available way for him to reinvent himself: “I tried to get younger but I couldn’t get younger. But I could grow a mustache, so I did that.” He stressed that many Korean leaders also used to have a mustache.

But, in an unexpected twist, on Sunday the embattled envoy posted a nearly three-minute-long video online showing the entire process of him bidding farewell to his contentious facial hair.

Still, he insisted he undertook that move so he could wear a facemask more comfortably in hot summer weather, rather than because succumbing to local public opinion. “Covid guidelines matter,” he said.

The hair-cutting decision was generally welcomed by netizens, many of whom said on Twitter that the diplomat looked younger with a clean-shaven face.

Share. Twitter Facebook Google+ Pinterest LinkedIn Tumblr Email
Previous ArticleTwo-bed house on sale for £55K in Leeds may be UK’s messiest home with mountains of rubbish and paper peeling off walls
Next Article Almost 4 Out Of 5 US Voters Support A Face Mask Mandate, Says Survey