American officials have broken into a former Chinese diplomatic facility in Texas, forcing their way in less than an hour after its staff vacated the building, which Washington ordered to close earlier this week. 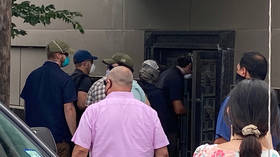 Federal officials, some believed to be with the State Department, gained entry to the facility just before 5pm local time on Friday, using power tools to pry open a back door after failing to breach three different entrances, the Houston Chronicle reported.

CHINESE CONSULATE HOUSTON CLOSURE: U.S. Department of State Diplomatic Security along with other law enforcement officials now standing guard after U.S. officials opened the doors up at the former Chinese consulate less than an hour ago. @KPRC2#CHINA#Consulatepic.twitter.com/3JDitKVj9W

The takeover attempt was captured in videos circulated on social media, showing a group of men outside the consulate, who circle the building after apparently failing to access one of its doors.

Police were also seen setting up a perimeter around the facility, and later guarding the building as officials attempted to get inside.

Chinese diplomatic staff exited the facility and left in vehicles around 4pm, less than an hour before US officials showed up.

The method of entry mirrors the manner in which US officials forced their way into the locked residence of Moscow’s consul-general in Seattle, Washington following a similar purge in 2018 – in that case, a mass ejection of some 60 Russian diplomatic personnel.

The Chinese consulate was shuttered under an order from US President Donald Trump on Wednesday, giving Beijing just 72 hours to evacuate its personnel while insisting the move was necessary to “protect American intellectual property” from alleged Chinese espionage.

Beijing has already responded in kind, ordering on Friday morning the closure of an American consulate in Chengdu – also reportedly giving a 72-hour time frame – which it deemed a “legitimate and necessary response” to Washington’s “unreasonable actions.”