The US is planning to construct nuclear reactors for use on the Moon and on Mars that would allow humans to inhabit them for long periods of time – and it’s asking for help from the private sector to do it. 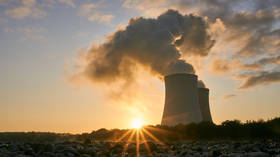 Washington wants to have a “fission surface power system” ready to go to space by the end of 2026, according to a formal request put out by the Department of Energy on Friday and directed at “leaders in the nuclear and space industries.”

The request asks industry leaders to help the government develop innovative technologies that will work both on the moon and on Mars.

BREAKING: @ENERGY is seeking feedback from industry partners to help @NASA develop a nuclear reactor that can be used on the moon. 🌑 📰 : https://t.co/KPbIwpdKzOpic.twitter.com/KI3YpZtbZV

“The prospect of deploying an advanced reactor to the lunar surface is as exciting as it is challenging,”said John Wagner, associate laboratory director of INL’s Nuclear Science & Technology Directorate.

First, a reactor design will need to be developed. Then a test reactor will be built, along with another that will be sent to the Moon. A flight system and lander will also need to be designed so that the reactor can be transported. The prototype will resemble “to the greatest extent practicable” all the aspects of the actual reactor to be subsequently deployed to the Moon, “which must include extensibility to Mars,” the request said.

The reactor can’t weigh more than 3,500kg (7,700 pounds) and will have to be capable of operating almost autonomously for a minimum of 10 years. It also needs to be able to generate at least 10 kilowatts of electricity. Multiple reactors will likely be taken to the Moon or Mars to meet the demand for a “sustainable human presence,” the Energy Department said.

The reactor will support exploration of the south polar area of the Moon, while no specific area of Mars has been identified for exploration just yet.

NASA, the Energy Department and the Idaho National Laboratory nuclear research facility will examine the ideas that come in to see how to develop the reactor. A government-industry webcast meeting will then be held in August to discuss expectations for the program.

There is some concern that, because of the timeline and the parameters of the design, highly enriched uranium could end up being used, which can also be employed to make weapons.

“This may drive or start an international space race to build and deploy new types of reactors requiring highly enriched uranium,” Edwin Lyman, director of the Nuclear Power Safety project at the Union of Concerned Scientists, told the New York Times.

The news comes as the US and Russia clashed this week over the weaponization of space. Washington accused Moscow of testing a space-based anti-satellite weapon on Thursday. Russia dismissed the US claim as propaganda and said it was an attempt to “distract” from the fact that the US itself wants to deploy space weapons.