Commentary on Donald Trump’s decision to send federal police to riot-stricken cities has taken a creative turn: according to a celebrated Russiagate disciple, Putin has “ordered” US cops to wear cyberpunk armor that doesn’t exist. 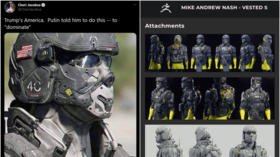 Cheri Jacobus, a popular #NeverTrump Twitter pundit and Russian collusion peddler, has joined the growing chorus of outrage over the use of federal law enforcement to help maintain order in Portland, Oregon, which has seen two months of increasingly violent demonstrations.

While most critics have focused on allegations that federal officers are too militarized and use excessive force against protesters, Jacobus took aim at the glaring elephant in the room: Trump is equipping law enforcement personnel with terrifying body armor, at the behest of Russian President Vladimir Putin.

“Trump’s America. Putin told him to do this – to ‘dominate,’” the celebrated social media intellectual wrote. She included a photograph of a “US police officer” decked out in a futuristic face mask and chest armor.

Trump’s America. Putin told him to do this — to “dominate” pic.twitter.com/2JEgX7N0ZV

“We are going to find out at some point that these Men were deputized by the Trump administration and are from white supremacy groups in the northwest,” read one reply.

A similarly disgusted observer, immune to the Kremlin’s infinite plots, noted matter-of-factly that Trump won’t receive a “bonus” from Moscow unless he successfully sparks a second US civil war.

Although Jacobus had presented overwhelming evidence that Trump was transforming federal agents into cyborgs in order to appease his Russian masters, there were several annoying party poopers who rudely pointed out that the “police officer” was actually CGI art that dates back to at least August 2016, months before Trump was even elected.

This is a CGI model. Concept art for a video game. pic.twitter.com/YthsAWp0V3

This is a Z-Brush digital image, originally designed by Mike Nash.It has been distributed recently as disinformation to heighten tensions around Federal Enforcement deployments.https://t.co/pXuLwykjqz. pic.twitter.com/Q4GLW78SIO

One netizen pointed out that the imaginary, computer-generated armor is “popular with the cyberpunk crowd” on Reddit.

“Why have you used this image? Why use it in this context? If you just copied and pasted it why didn’t you fact check it? You do more harm than good when you do this,” read one message.

“Dang nobody told me the feds looked this cool where do I sign up???” asked a snarky commenter.

Although the Putin-issued wardrobe may be imaginary, the debate over federal forces in Portland and other cities gripped by protesters has become a divisive topic for many Americans. Some have argued that federal forces have only made things worse, while others insist that they are necessary to bring an end to the chaos in Portland.