The Pentagon has accused Moscow of testing a new space weapon, insisting that such “aggression” validates the importance of the US’s Space Force. In reality, however, Russia merely used a scanning device on its own satellite. 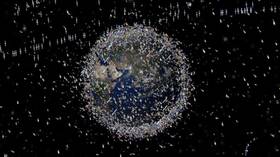 The latest Cold War-style ‘Russians are coming’ scare was issued by the US Space Command chief Gen. John W. Raymond on Thursday. The force said it has “evidence” that Moscow conducted a “non-destructive test of a space-based anti-satellite weapon” on July 15, allegedly releasing an object from one of its satellites towards another.

“This is further evidence of Russia’s continuing efforts to develop and test space-based systems,” Raymond said, adding that the incident was “consistent” with the Kremlin’s goal to employ weapons that “hold US and allied space assets at risk.”

Raymond offered Space Force a pat on the back, arguing that Russia’s development and testing of new orbital weapons “highlights the importance” of the new branch of the US armed forces. The US, he added, is ready to deter Russian “aggression” and defend itself from “hostile acts” in space.

The US claims were also echoed by the UK. Britain’s own military space bigwig, Air Vice-Marshal Harvey Smith, sad he was “concerned” about the Russian test, somewhat demoting the device to a “projectile with the characteristics of a weapon.” Quite ironically, Smith who is a top military official, also condemned the test as threatening the “peaceful use” of space.

Air Vice-Marshal @HarvSmyth, director of the UK’s Space Directorate, has responded to a recent Russian satellite test in space: pic.twitter.com/zGdGwCemmR

It was not immediately clear why it took over a week for the US and its allies to react to the test, especially since it had already been widely publicized in Russian media.

Last week, the country’s military said it tested a new “inspector-satellite,” scanning another Russian space object remotely. The satellite collected “valuable information on the technical condition of the probed object.”

The Pentagon has repeatedly accused Moscow of “hypocrisy,” claiming it is seeking to militarize space and covertly conducting space weaponry testing — though Moscow has repeatedly warned against the militarization of space and called on Washington to keep it weapons-free.