The US Supreme Court has handed a victory to the Trump administration, ruling that construction can continue on a $7.5 billion gas pipeline, which would run under the Appalachian Trail, in a major defeat for environmentalists. 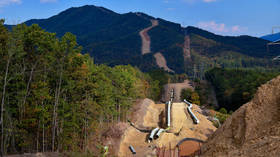 The 7-2 decision threw out the ruling of a lower court which had canceled the pipeline’s permit. Dominion Energy Inc. and the Trump administration had appealed the previous ruling.

The pipeline would run approximately 600 miles from West Virginia to North Carolina. About half a mile would cut under the George Washington National Forest approximately 600 feet beneath the trail. Construction on the project commenced in February 2018.

In oral arguments in February, Justice Samuel Alito sought to draw a distinction between the words “trail” and “land,” asking: “Why can’t we just say that the trail is on the surface and something that happens 600 feet below the surface is not on the trail?”

The mountain pipeline has faced numerous legal challenges and more legal obstacles lie ahead before it can be completed. If operational, the pipeline would carry about 1.5 billion cubic feet of gas every day.

Supporters of the project say it will create jobs and lower energy costs for consumers, while environmental activists fear it will threaten wildlife and harm pristine natural land and rivers, which are part of the National Park System.

The Sierra Club environmental organization had argued that only Congress could approve the crossing of the pipeline on park land. Activists also feared that a Supreme Court ruling in favor of big energy companies would be a slippery slope which could lead to further encroachment on other protected federal lands.

The MVP, a huge 42-inch fracked gas pipeline, is the last thing our rapidly-heating planet and already-industry-plundered state need. It would run from north WV to south VA. In the Monroe County area, the MVP construction has already ravaged pastures, farms & mountains.#NoMVPpic.twitter.com/id5NiYW8hb

There are already more than 50 pipelines crossing the Appalachian Trail but environmentalists argued that they were constructed before designation of the trail in 1958 and were therefore not relevant to the most recent debate.