The Supreme Court has extended employment protections to gay, lesbian and transgender employees, and tossed out landmark border control and gun rights cases, all seen as massive setbacks for US conservatives. 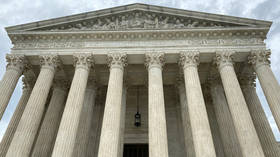 Many Republicans have long held that despite the liberal bias of the media and the left-wing activism dominating the streets, their real power came from their hold over the US judicial branch.

Senate Majority Leader Mitch McConnell (R-Kentucky) is one of these Republicans, and was willing to place his political career on the line to hold the late Justice Antonin Scalia’s seat open during the last months of the Obama administration, so he could replace Scalia with a suitably right-leaning judge once President Donald Trump took office.

On Monday, Scalia’s replacement Justice Neil Gorsuch and fellow conservative John Roberts sided with the court’s four liberal justices to extend workplace discrimination protections to gay, lesbian, and transgender employees in a surprise 6-3 decision. The six justices ruled that the 1964 Civil Rights Act’s prohibition of discrimination based on “sex” extends to sexual orientation as well.

Gorsuch’s opinion was clear: nobody may be fired for “traits or actions” that would not be “questioned in members of a different sex.”

LGBT advocates cheered the decision, and one would think that most conservatives would accept a simple ban on unjust dismissals. However, dissenting Justice Samuel Alito argued that the decision could have far-reaching consequences.

Alito argued that by conflating “sex” with “sexual orientation and gender identity” in an employment statute, similar laws surrounding issues of “sex” will be interpreted the same. Transgender people, he wrote, will now “be able to argue that they are entitled to use” bathrooms and locker rooms reserved for one gender. Likewise, he argued that religious schools and universities may no longer be able to legally segregate dorm rooms, healthcare providers may be forced to cover sex-reassignment surgery, and employers and teachers may be punished for addressing their employees and students by incorrect pronouns.

Democrats have thus far failed to pass the Equality Act, a piece of legislation that would grant these provisions. Joining Alito in dissent, Justice Brett Kavanaugh claimed that the court’s ruling “usurps the role of Congress,” codifying the Equality Act’s provisions without any debate. In effect, Mitch McConnell’s court passed what Mitch McConnell’s Senate had blocked.

Thanks to two GOP appointees — Roberts and Gorsuch — churches and schools that discriminate against LGBTs stand at risk of losing tax-exempt status, per the Bob Jones ruling. Hard to overstate the magnitude of this loss for religious conservatives.

Conservative commentators seethed at Gorsuch for siding with his liberal colleagues, accusing him of redefining both human biology and the English language “from the bench of the highest court in the land,” to quote pundit Michael Knowles.

Neil Gorsuch has redefined the most fundamental aspect of our nature from the bench of the highest court in the land. No ruling he might make in the future could counteract that radicalism. Conservatives will count him among the worst jurists in the history of the United States.

The Right’s losses weren’t limited to the LGBT decision. The court also chose on Monday to toss out a dozen gun rights cases, which sought to overturn a slew of state-level firearms restrictions, including magazine capacity limits and handgun carry bans.

Here we go, the “conservative” scotus codifies transgenderism into…1964 act! 4th massacre of the day at scotus. Gorsuch, Roberts join liberals in majority. I opposed both Trump nominees and i was right. What a pathetic movement. What a fraud. Thats real originalism there.

Furthermore, the court threw out the Trump administration’s case against California’s ‘Sanctuary State’ laws, that forbid local authorities from assisting federal immigration authorities. Trump has previously called these laws “deadly and unconstitutional,” and claimed that the Golden State “provides safe harbor to some of the most vicious and violent offenders on Earth.”

Altogether, the Supreme Court dealt Trump a devastating three-punch combination on Monday. Religious freedom, gun rights, and strict immigration control are cornerstones of Republican orthodoxy, and the LGBT ruling’s basis on the Civil Rights Act makes it politically impossible to argue against, considering the ‘Black Lives Matter’ protests consuming the US at present.

The consensus among the commentariat is that Monday’s verdicts have given liberals a decisive victory, one whose consequences will outlast Trump’s presidency, whether he wins in November or not.

The president himself greeted the decision with resignation, telling reporters at the White House that he’ll