Mobs broke into the Venezuelan consulate in the Colombian capital of Bogota, looting the mission’s premises and breaking furniture, a Venezuelan diplomat has claimed, showing footage of the damage. 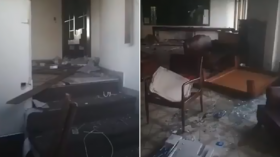 Venezuelan Foreign Minister Jorge Arreaza called for Colombian authorities to be held accountable for the act of vandalism. He said they left the diplomatic mission unprotected, violating two articles of the Vienna Conventions on Diplomatic and Consular Relations.

“The compound of the Venezuelan consulate in Bogota was completely looted and trashed,” Arreaza said. “The Colombian state must respond.”

Some Venezuelans responded to the accident with tweets accusing Colombia of “waging war” against Venezuela and calling for “reciprocal” treatment.

Still, others denounced Venezuelan President Nicolas Maduro as a “dictator” and accused his regime of “having vandalized Venezuela as a whole.“

Venezuela and Colombia have been at odds for years, trading mutual accusations, deportations and other hostile acts.

In November 2019, Colombia deported 59 Venezuelan nationals, accusing them of vandalism and instigating violence during a national strike.