Some of the activists in Portland have hired DNC lawyers and taken the Trump administration to court, arguing that federal agents sent to rein in the violent unrest in the city have “stamped out peaceful protesters.” 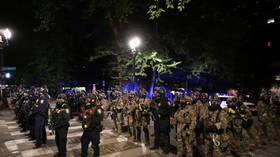 The lawsuit was filed in the District Court of Columbia on Monday, on behalf of Don’t Shoot Portland and Wall of Moms, groups that have joined forces with Antifa and Black Lives Matter in their showdown with federal agents in Portland.

The plaintiffs are represented by Perkins Coie LLP, a law firm on retainer with the Democratic National Committee (DNC), best known for paying Fusion GPS and Christopher Steele to compile the now-debunked salacious dossier on then-presidential candidate Donald Trump in 2016.

The lawsuit accuses the Trump administration of coming up with a “pretextual scheme” to deploy “an army of over 100 camouflage-clad federal agents” as a “national police force” in Portland, Oregon.

Making no mention of Antifa’s role in the ongoing disturbances, the lawsuit says that federal agents, “dressed in military fatigues and toting military gear – have tear-gassed peaceful protesters…made unlawful arrests without probable cause, and otherwise used violence in an effort to stamp out peaceful and constitutionally protected protesters.”

“Peaceful protesters” were “unable to eat or sleep because of the toxic poison,” were “shot with rubber bullets, bean bags, pepper spray and a range of other projectiles at close range and with brutal effect,” the lawsuit says.

Officers from the Department of Homeland Security (DHS) were sent to the riot-stricken city in early July, to protect federal property after an upstick of violence that saw protesters attempt to storm a federal courthouse and set it on fire, while bombarding officers protecting the building with large rocks, bottles and commercial-grade fireworks.

On Monday, the Washington Post reported that DHS was sending 100 additional officers to Portland. The agency has neither confirmed nor denied the report. Shortly after the legal challenge was announced, Trump himself doubled down on his push to reclaim the city from the radicals, tweeting that “Anarchists, Agitators or Protestors who vandalize or damage our Federal Courthouse in Portland, or any Federal Buildings in any of our Cities or States” face a “minimum” of 10 years behind bars.

Anarchists, Agitators or Protestors who vandalize or damage our Federal Courthouse in Portland, or any Federal Buildings in any of our Cities or States, will be prosecuted under our recently re-enacted Statues & Monuments Act. MINIMUM TEN YEARS IN PRISON. Don’t do it! @DHSgov

The tweet references Trump’s executive order last month to crack down on those who vandalize statues, monuments or any government property, in response to violent demonstrations in Washington, DC.