A primary school was put on lockdown after a half-naked man attacked a bus in Adelaide, South Australia on Thursday. He smashed a window, terrifying passengers, then threw road traffic signs at passing vehicles. 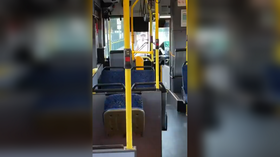 In footage taken from inside the bus and shared on social media, a man in his underwear is seen attempting to smash the driver’s window with a red road sign. Passengers can be heard shouting, “get down!” and “Oh God.” The incident took place outside the city’s Glenelg Primary School early on Thursday morning.

We are living in some crazy times | Half-naked Aussie attacks bus with a road signhttps://t.co/Tc5ZymDzlRpic.twitter.com/bqtrzIjnr8

The man managed to shatter the driver’s window, leaving him covered in glass, local media reports. He tried to break other windows on the bus before attempting to attack a motorist. A witness told ABC Radio Adelaide that the man ran into traffic and started throwing speed-limit signs at vehicles. Members of the public managed to detain the man before the police arrived at the scene.

Glenelg Primary School was thrown into lockdown this morning and bus passengers feared for their lives as a man in his undies went on a road sign rampage #7NEWSpic.twitter.com/yRviDRUjT4

South Australian police confirmed that the local man was arrested and taken by ambulance to a nearby hospital. “The man is currently undergoing surgery in hospital after he received several cuts to his arms during the incident,” police said.

“He will remain in hospital under a seven-day mental health assessment and once cleared will then be interviewed by police over this morning’s incident, with charges of property damage and assault likely.” The driver and passengers were left ‘shaken’ after the attack, but no injuries were reported.