A massive fire has erupted in a 28-story business center called Via Tower in the Turkish capital of Ankara. Stunned locals looked on and filmed the incident as huge clouds of dark smoke billowed from the building. 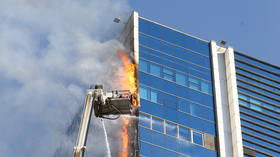 The blaze broke out on Monday evening local time at the site in the business district of Sogutozu. The fire started on the fifth floor, according to local reports, and eyewitness footage shows the lower part of the building enveloped by thick black smoke.

The flames quickly spread up the exterior of the tall tower. Parts of the exterior could even be seen crumbling in the blaze and falling off completely.

There have been no reports of casualties or injuries.

Ankara’s provincial governor Vasip Sahin arrived on the scene to assess the situation, and told local media that all necessary evacuations have been completed and that the fire was concentrated on the outside of the building. Firefighters are sweeping the tower, floor by floor, in case anyone remains trapped inside.