Traffic was paralyzed across Valencia, Spain as thousands of farmers descended on the capital to protest government inaction. 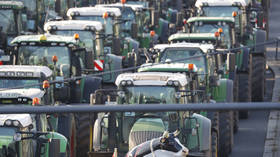 Disgruntled farmers blocked the entrance and exits to the main highway in Lucena near Malaga in the south, blocking off an entire section measuring approximately 22km (13.7 miles).

The farmers reportedly apologized to all those caught up in the protests and gave out oranges to help ease tensions.

All across the Valencian countryside agricultural workers are protesting government inaction; they say they aim to guarantee the future of Spain’s agricultural industry and provide better prices for local produce.

Meanwhile, in the capital Valencia, protests started at 11am local time with a tractor carrying two orange trees, chopped down to symbolize the “asphyxiating and desperate” state of Spanish agriculture.

Thousands of farmers, ranchers, and beekeepers arrived in buses from the three provinces accompanied by some 500 tractors. The Valencian government asked motorists not to drive into the city center and to avoid the highways ahead of the protests.

Similar protests have been held across Europe as farmers decry a perceived indifference towards their plight by local and EU governments.