Things quickly turned chaotic when a Lidl store in France put the PS4 console on sale for €95. Police were forced to use pepper spray to try and control a throng of frenzied shoppers as the situation spiraled out of control. 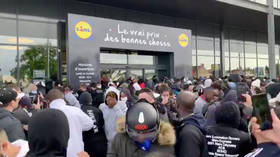 To celebrate the grand opening of the store in Orgeval, approximately 35 kilometers northeast of Paris, Lidl put a 500GB model of the hugely popular Sony game console on sale at less than one third of the usual retail price.

Unfortunately, news of the deal spread like wildfire on social media after a member of staff let it slip and, by the time the store was due to open its doors, an enormous crowd of eager shoppers had gathered to grab the offer.

The horde caused major traffic disruption in the area and scuffles soon broke out as people staunchly defended their positions in the haphazard queue. Police were drafted in to try and wrestle the situation under control and Lidl had to cancel the promotion as the situation deteriorated.

In a bid to disperse the crowd the police sprayed an irritant into the air, unfortunately managing to catch their own unfortunate officers in the crossfire.

The masses eventually gave up on their hopes of cut-price consoles when a loudspeaker announcement informed them that Lidl had sent the PS4s back to the supplier.

Lidl France said it was “very surprised” by the situation that developed and apologized for the inconvenience caused. “Today, we believe that the security conditions have not been met to keep the supermarket open. The sale of PS4 is also permanently canceled,” it said on Twitter.