Angry mobs ready to lynch a suspected pedophile raged in the central Kazakh city of Satpayev, as they hunted for a man who allegedly abducted and raped an underage girl. 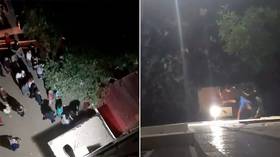 After receiving an emergency call from the girl’s father, local police joined the search, and a few hours later found the girl in an apartment in a high-rise building. Upon undergoing a medical examination, she was reunited with her mother and the alleged kidnapper was apprehended. A criminal case regarding kidnapping and rape has been opened.

Footage obtained by RT shows an angry crowd apparently throwing rocks and smashing windows. According to police, disorder started after the officers refused to hand the alleged pedophile over to the crowd which wanted to lynch him on the spot.