A mini-golf complex in Memphis, descended into complete chaos as a mob of hundreds of teenagers trashed the business over a faulty games machine and a four-dollar refund. One irate teenager even spat in an employee’s face. 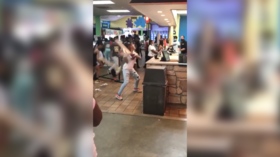 According to local media reports, the Putt-Putt Fun Center was forced to close because of overcrowding Saturday evening, after parents reportedly began dropping their children off en masse.

A group of some 300 to 400 teenagers became irate after staff wouldn’t issue an immediate refund after a games machine allegedly took a young girl’s four dollars. Eyewitness video from the scene shows that hell hath no fury like a teenager shortchanged.

The aggrieved girl tears down the plexiglass partition and throws the debris at staff before grabbing a metal rope stand and launching it behind the counter. Fireworks were reportedly let off inside the building, which triggered a stampede.

No employees were harmed in the violence but the young girl at the center of the uproar was later filmed spitting in an employee’s face.

Here’s another video showing the same young female spitting on an employee outside pic.twitter.com/Z0lsH0nv27

One 13-year-old boy was issued a juvenile summons for disorderly conduct and police investigations into the incident are ongoing.

“Unfortunately, yesterday evening we had an incident that we have never experienced in 57 years of business. Parents chose to leave large groups of teenagers at our facility without their supervision,” the center’s general manager, Aaron Boss said.